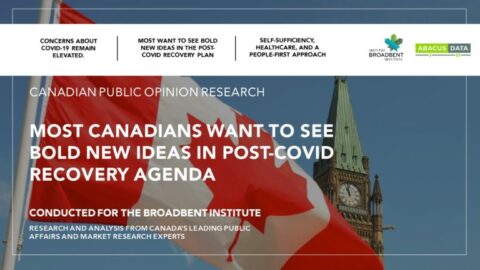 New information from a survey commissioned by the Broadbent Institute shows that a majority of Canadians (54 per cent) want to see the federal government announce bold new ideas for how to fundamentally improve people’s lives and deal with climate change in next week’s throne speech.

According to Canadians, the plan should include:

The desire for major changes is consistent across Canada and across the political spectrum. This is likely informed by the fact that only 19 per cent of Canadians think the worst of the pandemic is behind us and 65 per cent believe the pandemic has highlighted problems with how the economy and social programs are run that require major changes.

The survey, carried out by Abacus Data, also shows there is a political price to pay for inaction. Half say they will definitely or probably not vote Liberal if they do not present a plan with new ideas.

“Nearly half of Canadians think the worst of this pandemic is yet to come,” says Rick Smith, executive director of the Broadbent Institute. “People are worried, they want to see major action to address this worry, and there will be a political price to pay for any political party that doesn’t act accordingly.”

“The pandemic has highlighted many aspects of the economy and society that Canadians feel are not working right. From finding a good job to preparing for retirement, to finding affordable housing – many recognize that the pandemic has made life harder,” says David Coletto, chief executive officer of Abacus Data. “There is clear majority support for new ideas to improve the problems the pandemic has exposed. Most Canadians expect strong action from the government.”

About the Broadbent Institute

The Broadbent Institute is Canada’s leading progressive, independent organization championing change through the promotion of democracy, equality, and sustainability and the training of a new generation of leaders.