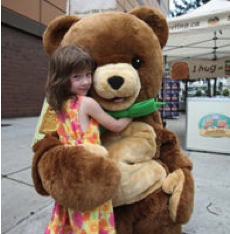 This summer Kraft Canada is celebrating its second Spread the Feeling Tour to raise donations for food banks across the country.

The tour, which runs until the end of August, invites consumers to give a bear hug, either in person or online at www.kraftpeanutbutter.com/en/spread-the-feeling. For each hug given or sent, Kraft will donate one 500-g jar of peanut butter to local food banks. In 2009 the company donated more than 50,000 jars. This year’s goal is 60,000 jars of peanut butter.

Tour events are planned for Halifax, Quebec City, Toronto, Ottawa, Winnipeg, Edmonton and Vancouver. During the events, consumers can have a real live bear hug from one of Kraft Peanut Butter’s two mascots, Crunchie and Smoothy.

Kraft Peanut Butter is celebrating its 50th anniversary this year. The iconic spread was launched in 1960 in Smooth Peanut Butter and Crunchy Peanut Butter varieties, featuring its two bear mascots on each bottle. Today the product is also available in light, all-natural and unsweetened varieties.