Think back to when you were a child. Did your parents tell you to eat something filling each morning – or better still, did they make you a tasty meal to start your day? Did you hear the refrain “Breakfast is the most important meal of the day?” If you did, then you’re lucky. Not only were your parents right – they usually are – but that message, and the breakfast habit, likely became an essential part of your understanding about nutrition and diet.

Unfortunately today, as parents struggle to pay the bills, or simply to get out the door in time for day care, school and work, breakfast is becoming one of the first meals to be dropped. According to results of a recent national Ipsos Reid survey of 1,754 parents with children, 32 per cent of parents say their child doesn’t always eat breakfast without a struggle. That number jumps to 61 per cent in Ontario. Parents cite the number-1 reason for not eating breakfast as being too rushed, followed by claims that their kids simply don’t like breakfast.

Sadly, poverty also plays a role in missing breakfast. The 2008 Report Card on Child and Family Poverty by advocacy organization Campaign 2000, showed that one in nine children in Canada live in poverty. And according to a 2004 Canadian Association of Food Banks study, more than 39 per cent of food bank users are children.

Breakfast for Learning statistics are even more telling. According to the Toronto-based organization, 31 per cent of elementary school students and 62 per cent of secondary school students “do not eat a healthy breakfast.” The national, non-profit organization helps start and sustain school-based breakfast, lunch and snack programs, and encourages a community participation model featuring public, private and volunteer partners. And for some students, the breakfast they receive through these programs may be their only meal of the day.

Skipping breakfast creates a host of problems in terms of general nutrition, leading to lack of energy and poor eating habits. It also may affect your long-term ability to maintain a healthy body weight, especially as it usually leads to snacking on convenient yet less-healthy items, including sugary treats that temporarily boost sluggish metabolisms.

But missing breakfast is especially troublesome in the case of children. For kids, lack of proper nutrition can result in decreased learning ability, lack of concentration and increased misbehaviour. “When kids are hungry it affects their self-esteem. And hunger sometimes comes out in anger, aggression, absenteeism and conflict between students,” says Jennifer White, director of Resource Development and Communications for Breakfast for Learning. Furthermore, it sends a message that getting proper nutrition isn’t essential to your well-being and in fact is not worth the time. 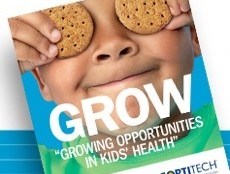 Kid’s Health – A market full of opportunities and possibilities