Processed cheese slices are a convenient staple, but how do they really score in a focus group 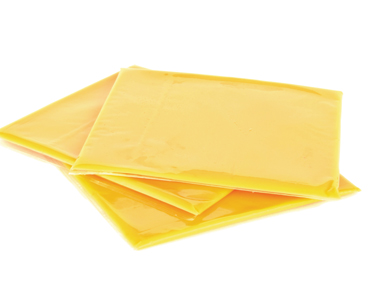 While they may not appeal to everyone, processed cheese slices are a convenient staple that many of us keep in the fridge as a go-to snack or crowd-pleasing topper. The iconic plastic-wrapped orange squares are part of our childhood memory reels, and continue to be a common fixture in Canadian food culture.

Efforts to “process” cheese for a longer shelf life began in 19th-century Germany, and the first industrially manufactured products came from Switzerland in 1911. In 1928, Kraft introduced its first processed cheese product to the American and Canadian markets. Over the years, numerous innovations were introduced to improve production, including the invention of the individually plastic-wrapped slices in 1956. Although the sale of processed cheese products is on the decline in Canada, we still manage to consume more than five pounds of processed cheese per person each year. We recently took a closer look at the category to see

how these slices stack up before the melt.

We recruited 50 females between the ages of 25 and 54 from the Greater Toronto Area who are the primary grocery shoppers in their households, and are regular consumers of processed cheese slices. They tasted and evaluated four brands, and were asked a series of detailed hedonic and “just about right” questions regarding the appearance, flavour, and textural profiles of the cheese slices.

This test focused on the sensory evaluation of the solid uncooked cheese. While nearly all of our participants claim to commonly use cheese slices for melting, many also claim to use them as a go-to snack right out of the wrapper — with over 80 per cent eating them on crackers, and close to 60 per cent regularly eating slices on their own.

There were no outstanding performances in this category in the cheese slices’ “unmelted” state. None of the four brands achieved big scores on the key measures of overall liking, purchase intent, or flavour. Instead they were all rated as quite mediocre. Three brands were grouped very close on all performance measures, while one stood apart (directionally) as the consistent underdog.

Despite this parity of liking, there were some substantial differences in the sensory profiles. The flavours were all surprisingly different, although none of them seemed to get it quite right. One brand was extremely strong, salty and tangy; two brands had very little presence of Cheddar flavour but just the right amount of salt; and another was oddly polarized on most aspects of the flavour. Three of the four brands seemed to get it right on thickness, while one brand stood apart as much too thin and floppy. And the brand with the lowest overall appeal was perceived to be much less creamy than the rest.

Perhaps not surprisingly, none of our samples had particularly high scores for their naturalness of colour or taste; after all, the idea of a “natural” processed cheese slice is kind of like evaluating the sweetness of a lemon or the spiciness of a chocolate cookie. But despite the “unnatural” character of this category, naturalness of taste was an attribute which strongly correlated with overall liking, and was a key weakness of the underdog brand. The majority of participants described this sample as “artificial” and not natural tasting. The colour of this slice was also significantly darker than the others, which may have been a visual cue to a more artificial flavour. So as unlikely as it may seem, naturalness of flavour was a hidden driver of performance in this sensory space.

Any way you slice it

Evaluated just out of the wrapper and into the mouth, the outcome for all samples in our test was underwhelming. It is likely that a test of the same array of brands presented in a grilled cheese sandwich would have revealed a much different story, with higher overall appeal. And certainly branding plays a huge role in this category where legacy carries a big advantage. Most consumers may not expect a processed cheese slice to be particularly natural or delicious. But even in this context, the best results were awarded to the most natural…or perhaps the “least unnatural” products, suggesting that increased attention to this hidden driver would help elevate the sensory performance.