Natural flavours and colours continue to have huge appeal for consumers, meaning there are more opportunities to innovate 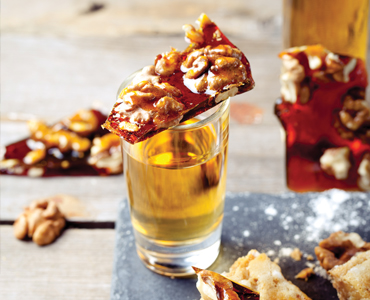 Canadians have an increased appetite for local, sustainable and ethical products across the board, from the clothes they put on their backs to what they serve on their kitchen tables. In the world of natural flavours and colours, product developers and manufacturers continue to seek new ways to meet consumer demand for transparency, while exploring new sources such as tree roots and bark that satisfy but do not sacrifice taste.

Anne Vlahos, Technical Business Development director, Natural Taste Solutions, Kerry, says that consumers are reading labels more often and sharing information on social media. “Overall, there is an increased consumer awareness of what is in their food and where it comes from. The opportunity for innovation lies within balancing the need for foods and beverages to taste great, while meeting

consumer demands for simple, short labels,” says Vlahos. Kerry has seen an increased interest for authentic ingredients on the label, including sustainably sourced ingredients, and natural and organic flavours and extracts.

The Government of Canada recently made changes to food labelling regulations, and manufacturers have a five-year transition period to implement the new requirements. One such requirement is to have sugar-based ingredients specifically listed in brackets after “sugar” so that consumers are aware of the types of sugars added to a particular food. Additionally, says Joanna Barker, product manager at CCC Ingredients, “Manufacturers won’t be able to just list ‘natural colour’ on their label anymore, but will have to list out each colour individually instead.” This new requirement presents its own challenges for manufacturers.

In general, natural flavours and colours can be challenging, says Kerry’s Otis Curtis, Business Development, Taste and Nutrition Solutions, as they are impacted by such factors as seasonality, climate, natural disasters and political unrest. This ultimately affects pricing, availability and quality. “For example, the recent weather events in Madagascar have impacted the global vanilla market,” says Curtis, referring to Tropical Cyclone Enawo, which hit the island in March. “An alternative is to build a compounded vanilla flavour with other natural flavours. This solution can provide the same vanilla taste expectation while requiring a smaller quantity of vanilla beans. The result is a greater consistency in pricing, availability and quality,” says Curtis.

Whether a protein bar or a scoop of ice cream, no one wants to sink their teeth into something that simply doesn’t taste good, no matter what the potential health benefits. “Flavour modulation is critical when formulating for today’s consumer,” says Lauren Williams, Marketing manager at Sensient. “They are looking to improve the health profile of what they eat, but they will not sacrifice taste and enjoyment for anything.” This can be another challenge facing product developers. Williams explains that when sugar is removed or positive nutrition like protein is added, it can create an unsatisfactory product. “Consumers may purchase it once, but if they don’t enjoy the experience they will not buy it again,” she says.

One opportunity is for product developers to use an enhancer to increase the perception of sweetness in a product. “This boosts the impact and effectiveness of a smaller amount of sugar or sweeteners,” says Williams, adding that maskers can help to smooth out changes in the profile that were once covered up with sweeteners or are new as a result of the change in formulation. “As an analogy, it is similar to how a sip of a strong wine can influence the flavour of the next bite of food that you take. We are seeking out the compounds that do this but target specific taste attributes. You can even layer in ingredients that add back mouthfeel and texture.” As with any product, Williams notes that there’s a balance between adding ingredients that can improve the product without making it overly complex.

This is a consumer need that won’t be going away. Sensient continues to research properties and molecules in natural botanicals such as tree roots and bark that can enhance the sweetness of sugar.

Putting maple on the map

Maple syrup isn’t just for pancakes. As its health benefits come to light, pure maple syrup may be the new natural sweetener that takes hold in the marketplace. At an April symposium in San Francisco, scientists from around the world shared their research on maple’s potential impact on several areas in the human body affected by chronic inflammation. They also looked at maple’s emerging link to a healthy gut microbiome.

Dr. Navindra Seeram, associate professor in the Department of Biomedical and Pharmaceutical Sciences at the University of Rhode Island, organized the symposium. In 2009, he collaborated with the Federation of Quebec Maple Syrup Producers to study the properties of maple. “The maple tree moves minerals from the soil, and there are quite a lot of interesting natural antioxidants similar to what you would find in green tea, red wine and berries,” says Seeram. Maple syrup contains a unique plant antioxidant named “Quebecol” (after the Canadian province), which is formed during the cooking process when sap is boiled. Early research indicates that Quebecol positively affects inflammation in the body, and could act as an anti-cancer drug.

New research presented at the symposium from the University of Rhode Island found the presence of inulin in maple syrup. Inulin acts as a prebiotic and works to encourage the growth of good bacteria in the gut. Seeram acknowledges sugar’s bad reputation and notes that any sugar should be consumed moderately. However, maple syrup is a healthy alternative that provides the same sweetness, a rich flavour, and is essentially a cocktail of minerals, vitamins and antioxidants. And for Canadians interested in locally sourced and sustainable food ingredients, maple is a perfect choice as it’s only grown in eastern North America, with Quebec being a major producer.

In regard to natural colour trends, Barker says that titanium dioxide and caramel colour replacers will continue to be on customers’ minds. Savoury Systems International recently launched a product that can be used as a caramel colour replacer, but does not impact flavour. The product, #1065 Yeast Extract Dark, is a combination of yeast extract and natural flavouring, but the flavouring component imparts dark brown colour, says Kevin McDermott, COO of Savoury Systems International. “The base flavour of the yeast extract is mild and brothy. This product works great in savoury applications, and can complement a food product where there is a desire to have a darker colour, while still attributing a savoury and mild, flavour- enhancing taste,” says McDermott.