There’s a lot of buzz about za’atar these days. But what, exactly, is this popular Middle Eastern spice blend? 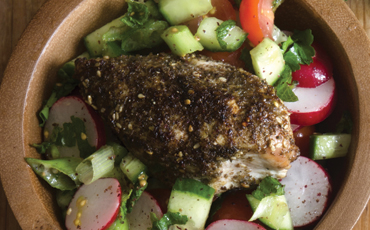 It can be mixed with olive oil and then used as a bread dip or spread onto flatbread. It’s often used to season a variety of meats, it can add flair to drab vegetables, and can even be sprinkled into yogurt. It’s called za’atar, and it’s getting a lot of attention in the food world these days. But what, exactly, is it? The answer to that question isn’t as straightforward as it may seem.

Strictly speaking, if you translate za’atar from the Arabic word, it simply means thyme. But when most people are talking about za’atar, they’re referring to a seasoning made from several fragrant Middle Eastern herbs and spices blended together.

“There are as many different recipes for za’atar as there are cooks,” explains Don Dickson, owner of South China Seas Trading Company in Vancouver, “but there are some standard spices that are almost always in there.” Thyme, of course, is always present in a za’atar mix, while sesame seed and sumac are nearly always used as well. “Cumin is not always there, but it’s commonly a part of the mix,” adds Dickson.

Colin Leach, owner of Calgary’s The Silk Road Spice Merchant, describes the general flavour of za’atar as “nutty – from the sesame seeds – mixed with herbal flavours, and a little bit of tart taste, from the sumac.” But like Dickson, he’s also quick to quick to point out the wide variety of blends: “I’ve seen everything from ones made with mainly herbs and a lot of salt, to ones that are mostly sesame seeds and a little bit of herbs, and everything in between,” he says. “The one that we make and sell is fairly balanced – it does have a little salt, lots of herbs, lots of sesame and lots of lemon and sumac. I like the tartness and the nuttiness and the herbs all in balance.”

Dickson says South China Seas began creating and selling its own za’atar mix several years ago after getting numerous requests for it. Their recipe for za’atar combines several herbs with sumac and sesame, leaving out the salt, “so that you can add it to suit your taste,” says Dickson.

How is it typically used?

Za’atar has a wide variety of culinary uses, including as a rub or seasoning for meats like lamb kebabs or chicken; as a flavouring to add zest to vegetables like tomatoes or green beans; or to sprinkle on cheese or yogurt. In the Middle East, it’s frequently mixed with olive oil and spread on a flatbread before being baked. Many people also dip their bread into the za’atar/olive oil mixture.

In many parts of the Middle East, bread with za’atar is a common breakfast food. “It’s considered to be an energizing mix of herbs and spices, so it’s viewed as an energizing way to start your day,” says Dickson.

As creative cooks are becoming more familiar with za’atar, we can expect to see more innovative uses for the seasoning. “Some people will come by and smell the za’atar and say, ‘this would be great in my salad dressing, or this would be great on my yams,’” says Leach. Adds Dickson, “When I’ve got something on a plate that seems a little bit meh, I’ll often use za’atar to lift it up a little bit.”

Growing in popularity – but why now?

Over the past couple of years, Dickson has definitely seen za’atar increase in popularity. “We’re selling tons of it,” he says, “and we’re also getting a lot of inquiries about it from the media, which generally means there’s an interest in the community.” Dickson recently was asked to appear in a segment on a TV show about cooking with za’atar, for instance.

The President’s Choice grocery brand has even released its own blend of the fragrant Middle Eastern seasoning – a clear sign of za’atar’s mainstream appeal. But why now? Neither Leach nor Dickson have a definitive answer to this question, but both suspect it has something to do with a generally more adventurous population when it comes to food. “I certainly have noticed that people are becoming more curious about ingredients they haven’t seen before, and za’atar would definitely be categorized in with that,” says Leach, adding that in general, all of his Middle Eastern spices are selling quite well these days.

“Za’atar is nice and versatile,” he adds, “so if you’re looking for something with a slightly more exotic flavour than usual, or a little Middle Eastern flavour to add to something that isn’t otherwise a traditionally Middle Eastern dish, za’atar is just the thing.”