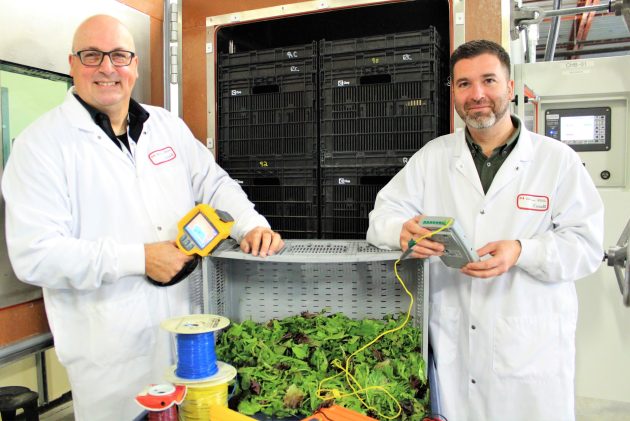 Researchers Sébastien Villeneuve and Louis Sasseville during a trial to assess the state of conservation of lettuce after its passage through the devices for simulating food transport conditions.

According to the Food and Agriculture Organization of the United Nations (FAO), a third of the world’s food is lost each year. In Canada, this proportion reaches 40 per cent annually. Food waste reduction strategies were proposed in 2015 at a G20 meeting that Canada attended.

Since then, a team of Agriculture and Agri-food Canada (AAFC) scientists in Saint-Hyacinthe, Que., has intensified their research on the issue. In a huge country where the climate can vary between -30 C in winter and +30 C in summer, preserving perishable food throughout food distribution networks poses many challenges. Sébastien Villeneuve, PhD, and Louis Sasseville, PhD, have developed a series of models to simulate cold chains in the country’s food distribution networks and have identified possible areas for improvement.

“Cold chain” refers to the multiple steps and refrigeration rules that must be followed to ensure that food is kept at an optimal storage temperature during transport and storage. Various strategies for managing this chain can slow down the deterioration of food between the time it leaves a farm or a processing company, and the time it arrives in grocery stores for sale to consumers.

In Canada, both the winter and summer seasons are problematic. In summer, food is likely to be exposed to too high ambient temperatures. In winter, frost must be avoided to protect cold-sensitive foods. We also note that the shoulder seasons are increasingly having impacts on production (e.g. late or early frost, spring drought). A succession of inadequate temperatures of varying lengths of time leads to food waste. For example, if boxes of fruit or meat are left repeatedly and/or for too long out of refrigerated trucks. Food is faded and sometimes even contaminated with pathogenic bacteria that have multiplied during transport.

The weaknesses of the cold chains have a much greater impact on the hundreds of isolated communities in Northern Canada, often Indigenous or Inuit communities, who are experiencing significant food security problems.

Improving refrigeration conditions where they pose the greatest risk requires being able to identify weak links in the land and air routes used by food (including ice routes in the North) during the long chain of production, processing, transport, storage and retail.

AAFC scientists have recently developed small, medium and large-scale models at low cost to simulate the various cold chain conditions. Their forecasting models, based on food transport databases, can:

“A cold chain breakdown of just a few hours combined with the effects of transport vibration or depressurization at altitude can result in a reduction of the shelf life of a food of several days or even weeks,” said Sébastien Villeneuve, scientist in food process engineering, AAFC.

When the trials of these models are completed, weaknesses in Canadian cold chain management systems can be addressed, food waste reduced and food safety and security improved. Ultimately, resources such as water, land, energy, labour and capital will no longer be wasted in vain.