From the tree of life

Grown in Africa on the continent’s ancient baobab trees, baobab is now an up-and-coming superfruit in the North American marketplace 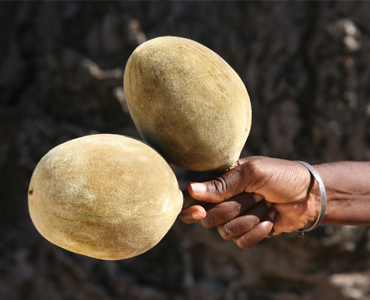 In Africa, the baobab tree is known as the “tree of life.” And for good reason – the hardy ancient tree is able to store up to 100,000 L of water in its thick trunk, and is therefore capable of surviving and thriving in the extremely arid dry seasons of the 32 African countries where it grows. This uniquely shaped tree (it almost appears to be growing upside-down) is regarded with a kind of spiritual, mystical reverence in parts of Africa.

While the fruit of the baobab tree has long been a staple in Africa, it’s now making its way to other parts of the world,

including North America, as consumers discover just how healthy this African “superfruit” is.

What is baobab fruit?

The baobab tree grows large gray/green pods on it, which is where the edible baobab fruit comes from. If you crack the hard skin of the pod, the inside holds the white baobab pulp. The fruit inside can be eaten straight, but it’s often dried and turned into powder.

“This is a superfruit that’s very high in antioxidants,” says Stephan Broburg, general manager of Baobab Foods in Bellevue, Wash., who notes that baobab is extremely high in fibre and electrolytes as well. It’s also remarkably rich in Vitamin C.

Baobab’s mild, pleasant flavour makes it easy to add into a wide range of foods and beverages. “Straight baobab diluted tastes like watered-down lemonade, so it’s very easy to put in formulas – so it’s not something you have to mask, it’s not an aggressive flavour,” says Broburg.

In North America baobab is most popular in its dried powder form, adding natural nutrition content to foods and beverages. “It’s used in a number of powdered drink mixes, and a lot of protein mixes,” says Broburg. “It’s in RTD bottled products, juices, and there’s a large company coming out with a line of smoothies [using baobab]. It’s being added to cereals, vanilla clusters, nutrition bars, that type of thing.”

Baobab Foods, which has been in business for the past six years, has been selling its powdered baobab primarily as an industrial ingredient, says Broburg. But he’s really seeing it “pivoting right now” in terms of consumer use and retail availability. “Up until last year it’s been used as an ingredient in both food and quasi-supplements (like protein mixes), but now it’s going into more retail stores,” he says. “So the powder is now something that you’ve just got at home – you can put it in smoothies, juice, cookies, pancakes, add it into yogurt. It’s kind of an all-purpose powder.”

Baobab Foods has also created a bite-size snack made from baobab called BaoBites. “We wanted to create a superfruit snack that delivers the same nutrients as baobab powder in a snack format,” says Broburg. “So it can be eaten as a straight snack, or it can be used in nutrition bars. You can put it in chocolate, you can put it in frozen cookie dough – it has a lot of uses.”

We’ve recently been seeing countless articles touting baobab as the latest up-and-coming nutritious superfood in high-profile publications. The Telegraph (of London) speculated last year that baobab could be “the superfood of 2015,” for instance. Meanwhile, this spring National Geographic featured an article titled “Is Africa’s Ancient Baobab Tree Growing the Next Superfood?”

Broburg says sales are certainly reflecting this rapidly growing popularity: “The first year we were in business, maybe we did one ton (of product sales), and this year we’ll probably do 250 tons.” Companies like Baobab Foods have worked hard to spread the word about baobab. “We’ve done a lot of work on development and building awareness on the R&D side of companies, and now we’re doing a lot more work on the consumer side,” says Broburg. That said, today’s consumer has been quite open to trying baobab partly because, as Broburg says, “it’s just got a great story.”