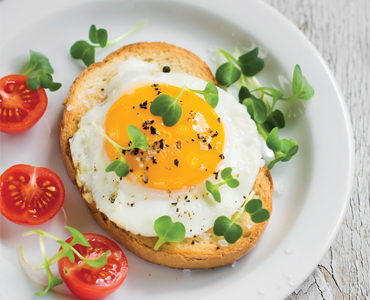 Move over cold cereal. Consumers are diversifying their choices of breakfast foods whether they are eating this meal at home or away. Breakfast items that combine fresh, nutritious ingredients infused with global flavours appeal to all ages. Throw convenience and portability into the mix and food manufacturers have a winning formula sure to capture a share in the exploding breakfast market category.

Canadians recognize breakfast as an important meal of the day. In a Ricardo Media survey developed in partnership with Léger Marketing, 72 per cent of the respondents said they ate breakfast almost every morning. And with good reason. Some of the

Whether eaten at home or away, breakfast is big business. Foodservice sales during the breakfast daypart reached an estimated US$52.2 billion in 2015, and are forecast to climb to US$60.4 billion by 2019, according to market research firm Mintel.

Though ready-to-eat cereal remains a top favourite breakfast food, followed by toast, fruit, and hot cereal, sales of breakfast cereals are on a downward trend. Between 2010 and 2015 Canadian sales of ready-to-eat cereal declined 17.9 per cent, and are projected to fall another 8.6 per cent by 2020, according to Euromonitor International.

The breakfast cereal slide may be thanks to the changing diets and lifestyles of consumers. There is more awareness of how food choices impact personal health, meaning sugary cereals just do not cut it anymore. Moreover, a hectic weekday morning means the washing up of a bowl and spoon may be just too much.

However, not all cereal companies are seeing a long-term decline in ready-to-eat cereal sales. The largest organic cereal brand in North America, Richmond, B.C.-based Nature’s Path, has experienced year-over-year, double-digit growth since start up in 1985. This spring it introduced Qi’a Superflakes, a sprouted grain flake cereal boosted with superfoods like chia and coconut.

A focus on health and nutrition has been trending for some time and all-natural and organic are looked upon as healthier choices. Organic cereal sales have gained one per cent in Canada from a year ago (up four per cent in the U.S.), reports Nielsen MarketTrack.

Frédérique Delagrave, director of Marketing at St. Hubert, Que.-based Liberté, says consumers are looking for breakfast foods that are not only healthy, but that also provide “sustainable energy.” Greek yogurt is a perfect example because it’s high in protein, she says.

Indeed, Greek yogurt is a food industry success story. For nearly a decade, Greek and Greek-style yogurt has been the driving force behind growth in the yogurt and yogurt drink market in the U.S. The top reason is that it is perceived to be healthier than regular yogurt.

Liberté recently introduced the first Greek yogurt in a pouch. Targeting young adults on the go, the 120-g pouch offers nine grams of protein, offering convenience and portability, keys to attracting the 18- to 34-year-old consumer more likely to skip breakfast.

For consumers ages 45 and up who are less likely to skip breakfast, Liberté offers new taste experiences with its plain or non-flavoured dairy products. The campaign avoids providing recipes and instead introduces “flavour bombs.” For example, the Southern Belle combines Liberté Méditerranée with grilled peaches, thick-sliced bacon, roasted corn, basil and chilli oil. “We want to push the taste experience to the next level,” says Delagrave. “We don’t believe yogurt has to be sweet. It can be salty.”

Though requiring prep or cooking, eggs are perceived to be a fresh, nutritious food, and an example of the trend towards natural ingredients that are minimally processed. Consumers are seeing more positive coverage in the mainstream media about the place of high-protein foods containing fat in a healthy diet. Also helping to change consumer attitudes toward eggs is the fact that the U.S.’s top nutrition advisory panel has eased up its restrictions to dietary cholesterol.

Another reason may be the egg’s versatility. Kim Kesseler, a registered dietitian and nutrition officer for Egg Farmers of Canada, says eggs provide a nutritious breakfast that can be prepared in advance, noting, “I recommend hard-cooking a dozen and having them available to grab and go weekday mornings.”

But eggs also offer the perfect backdrop for spicy ingredients, a feature in many multicultural cuisines. The American Egg Board reported that overall most consumers want to see global-inspired flavours offered at breakfast. Indeed, a survey of nearly 1,600 professional American chefs by the National Restaurant Association, said one of the top 20 food trends is ethnic-inspired breakfast items.

Restaurant patrons in the U.S. are already seeing Asian-inspired breakfast items such as teriyaki glaze on omelettes, mushroom congee with soft-boiled egg, kimchi with brown rice and sunny-side up eggs, or sriracha on breakfast sandwiches. The trend is picking up in the frozen food aisle as well, where grocery shoppers can pick up Southwestern-inspired breakfast bowls or burritos.

Demand for spicier food for breakfast comes from younger generations – generation Z and millennials. According to Darren Seifer, food and beverage industry analyst at the NPD Group, these groups, as well as Hispanics, will be the growth drivers inthis category over the next five years.

“This is a pivotal time for manufacturers and retailers to gain their favour as many of their habits are being formed now,” he says. “Most are still at a life stage when their behaviours are flexible and they are receptive.”

Food manufacturers looking to expand their offerings need to consider breakfast items. Nutrition and convenience will drive this category successfully.