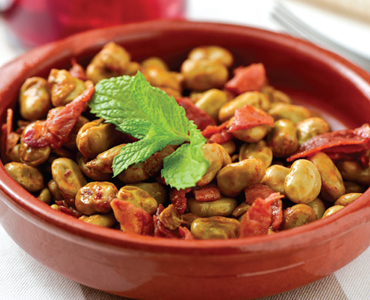 The faba bean is almost like the Cinderella of legumes. We grow some in Canada but it’s mainly used in animal feed or exported to countries in the Middle East for human consumption. It doesn’t get the respect its due or much of the spotlight – not like peas, lentils and chickpeas.

But this humble legume has a story. Bert Vandenberg knows almost everything there is to know

about faba beans. The Saskatoon-based NSERC Industrial Research Chair in Genetic Improvement of Lentils at the University of Saskatchewan says, “It was a staple food of the Romans. It’s quite possible they conquered the Mediterranean and beyond because they had more protein.”

Faba beans provide nutrients, but they were and still are a critical component of farming, as are all legumes, since the beginning of agriculture, says Vandenberg. Planting legumes feeds the soil and for that reason every civilization has had a legume in its farming (fertilizers are a recent invention.) The process is called nitrogen fixation, and faba beans “are the best crop we have for that,” he says.

Faba are higher in protein than peas and lentils so they fix more nitrogen. Faba beans are also not susceptible to the same diseases as peas and lentils. They love wet weather, and, says Vandenberg, they’re “probably the most competitive legume we have. It bursts out of the ground, gets tall and creates shade. It can shade out the weeds more so than a lot of other crops.”

Western Canada grows two types of faba beans, but Vandenberg says there are probably a dozen varieties in Canada. They’re also known as fava, but about 35 years ago at a meeting of international plant scientists “they decided to get on the same page and went with vicia faba or faba,” says Vandenberg. The Saskatchewan Pulse Growers’ website says faba beans are “an ancient small-seeded relative of the Chinese broad bean.”

Why are they good for us?

Amanda Kilduff, a community dietitian in Saskatoon, Sask., explains that faba beans are high in fibre, which is “important for preventing diabetes, colon cancer and heart disease.” They’re also high in protein, and it’s just as nutritious as the protein from animals. But, she adds, as with any plant protein they need to be consumed with vitamin C so our bodies absorb the iron we need. They’re also filling because of the fibre and protein, which is ideal for weight management.

Ben Carnevale, a food scientist and manager of Sales and Research & Development at Cambridge, Ont.-based Blendtek Ingredients, says, “Out of all the pulses I’ve worked with, faba bean flour is the most nutrient dense.” He points out that the beans are rich in folate and a very high source of manganese.

However, faba beans also contain a compound called vicine, which for some people who don’t have a specific enzyme causes red blood cells to burst, a condition known as favism. Vandenberg says the condition has been known about for thousands of years, and that current research is focusing on genetically removing vicine.

There’s also the issue of tannins in some varieties. Shannon Hood-Nifer, vice-president of Innovation and technology at the Saskatchewan Food Centre, says many clients are waiting for breeding to be complete for faba that are low-tannin. The centre and POS Bio-Sciences received a grant from the Saskatchewan Pulse Growers to work on ways to commercialize faba beans. She explains that faba that are higher in tannins will change colour over time, which is a shelf-life concern for clients.

According to Carnevale, faba bean flour works well in baked goods and pizza doughs. But it is better blended with other flours such as buckwheat and amaranth. “The buckwheat and amaranth provide a nice grain-like structure and the faba bean flour offers the rich nutrient base,” he says. He’s currently working with bakeries in Canada and expects consumers will see more pulse flour blends emerging and not just in gluten-free products. The other advantage of faba beans is that to create the flour, “you just have to mill the bean. It doesn’t have to be treated further.” He expects more products with pulse flours will emerge since the benefits are clear. “You can eat well, you can live well, and food can taste really good,” he says.