A taste of the Maritimes 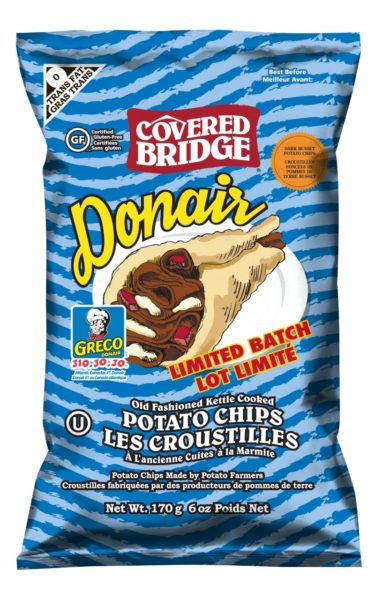 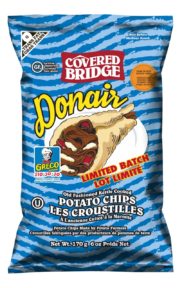 Two of Maritimers’ favourite eats have been paired to create Covered Bridge Potato Chip’s new Greco Donair-flavoured chips. As its name suggests, the Waterville, N.B. manufacturer has partnered with another well-known Maritime firm to introduce this latest addition to its ever-expanding product line. “We’re thrilled to team up with Greco Pizza to produce a unique snack that’s sure to have broad appeal, especially in the Maritimes where the donair ranks up there as one of the region’s most iconic foods,” says Covered Bridge CEO and president Ryan Albright. “It’s a natural fit for both of our companies and our customers.” For those unfamiliar with the tasty treat, the donair is a tender kebab of ground beef, dressed in a sweet, milky sauce, topped with tomatoes and onions, and wrapped in a warm pita. Greco Pizza has been serving donairs since it opened its first restaurant in Moncton, NB, in 1977. Today, Greco is the largest pizza chain in Atlantic Canada and the donair remains one of the most popular items on its menu. Greco Donair chips will be produced initially as a limited batch, so consumers should not delay in trying out this new flavour. The product started appearing on store shelves the third week in May, and were being sold at Covered Bridge’s retail partner locations throughout Atlantic Canada as of mid-June. www.coveredbridgechips.com