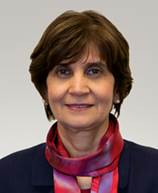 Prime Minister Justin Trudeau has announced that Siddika Mithani has been appointed the president of the Canadian Food Inspection Agency, effective February 27, 2019.  The CFIA presidency has been vacant for two months since the departure of Paul Glover, who left to lead Shared Services Canada.

Mithani began her career in Canada’s civil service in 1997, starting as a scientific evaluator for Health Canada, eventually becoming a director general in the department’s Veterinary Drugs Directorate before being promoted to associate assistant deputy minister of the health products and food branch.

In 2010, Mithani left Health Canada to become an assistant deputy minister (ADM) with Fisheries and Oceans.  She held this position for two years before leaving to assume an ADM role with Agriculture and Agri-Food Canada (AAFC). She then spent a year as associate deputy minister at Environment Canada before taking over at PHAC.

Related
CFIA president to be replaced
Cucumbers may be cause of Salmonella outbreak in five provinces
U.S. & Canada have comparable food safety systems: CFIA and FDA