Most consumers know almost nothing about how grocery stores operate

A family’s biggest expense, after housing and transportation, is groceries, at about 10 per cent of income. Canadians spend about $100 billion annually at our roughly 3,000 grocery stores. Almost no one, no family, fails to go to a grocery store each week. Yet most people know almost nothing about how these stores operate or where the food they sell comes from. And, remarkably, almost nothing has been written about them.

Enter Michael Rulhman to fill this gap in the United States. In his latest book Grocery: The Buying and Selling of Food in America (Abrams Press, 2017), Rulhman takes the reader along a fascinating journey from the front door of your local store through the centre aisles (what he calls a food desert) and around the perimeter, stopping at each of the nine departments in a typical supermarket.

Ruhlman’s book is particularly good in the early chapters on the colourful history of grocery stores. He describes how, at the beginning of the 20th century, the local general store sold about 200 products but by the end of the century the typical supermarket had over 40,000 individual items or SKUs (stock keeping units), each with its own unique bar code.

Ruhlman is an excellent story teller. For example, he tells the story of George Gilman who started selling tea in the 1860s, grandly calling his company The Great American Tea Company and later, with the advent of transcontinental railways, re-naming it Great Atlantic and Pacific Tea Company. Taking over the company in 1871, young George Hartford saw the opportunity created by the great Chicago fire and opened the first A&P store there, expanding into other food products. By the 1880s there were 150 stores, and by the 1920s it owned 16,000 grocery stores, 70 factories and more than 100 warehouses, opening seven stores a day in America. Not only was A&P the biggest food retailer in the world, it was the world’s biggest retailer of any kind. A&P pioneered a familiar strategy: taking advantage of their enormous purchasing power and centralized warehouse systems, they battled unions, pressed suppliers to lower prices, created private brands (A&P Baking Soda was the first “private brand”), cut out the middleman and created volume. Following the death of George Hartford, the company made a series of strategic blunders and failed to respond to the changing nature of the industry. A&P declared bankruptcy and closed its last store in 2015, making it a cautionary tale for today’s supermarket chains.

The Walmart story is equally fascinating. While the company didn’t start to sell food until 1988, it’s now the world’s biggest grocer, its grocery revenue alone bigger than the gross sales of General Motors and AT&T.

Ruhlman also provides interesting insights on the factors that led to the growth of the self-service supermarket. These days we think of innovation as something high tech. The three revolutionary inventions that enabled the development of supermarkets were the tin can, the accidental discovery of the cardboard box (a paper bag machine jammed) and in 1937 the invention by Sylvan Goldman of the lowly grocery shopping cart (Goldman patented an improvement in 1947 – the shopping cart with the fold down child seat).

Unfortunately Ruhlman, the excellent story teller, is not so good at serious journalism. His treatment of current public policy issues is wholly lacking in balance, analysis or scholarly rigour. Relying continuously on such well known critics of the food industry as Eric Schlosser, Marion Nestle and Michael Pollan, he never misses an opportunity to rant against Big Food, breakfast cereals, food that isn’t organic, processed food, and GMOs…you get the picture. His evidence is mostly anecdotal, failing to recognize that the plural of anecdote isn’t data. His snarky style is often over the top and leads to such outrageously wrong statements as “Canola stands for Canadian oil association – that’s not food.”

Grocery is a missed opportunity. There is so much more to tell, so many more secrets to be revealed about your local supermarket. The real story of A&P to Amazon is still yet to be told. 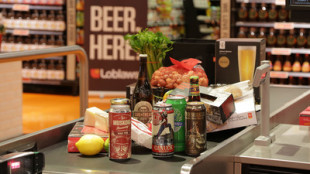 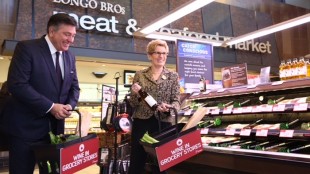 Wine to be sold in Ontario grocery stores