Wine to be sold in Ontario grocery stores

Following the introduction of beer in Ontario grocery stores last December, a number of grocery stores across the province will start selling a selection of wine, beer and cider this fall 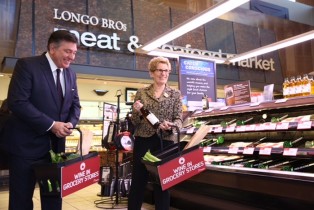 Ontario Premier Kathleen Wynne has announced that Ontario will make wine available at up to 300 independent and large grocery stores. Following the introduction of beer in Ontario grocery stores last December, 70 grocery stores across Ontario will be able to start selling a selection of wine, beer and cider this coming fall.

The announcement was made on Feb. 18, 2016, as the government accepted the final recommendations from the Premier’s Advisory Council on Government Assets.

Other key aspects of the recommendations include allowing cider to be sold wherever beer is sold in grocery stores; including fruit wines and craft cider in a program that allows Vintners Quality Alliance (VQA) Ontario wines to be sold at farmers’ markets; and reducing red tape and eliminating unnecessary regulations to increase opportunities and deliver cost savings for producers and their customers, including new opportunities for craft distillers.

“Ontario has an emerging craft cider and wine sector and our government’s announcement today will ensure that the sector continues to thrive, while providing a boost to our local producers and the farmers who support them. By increasing the opportunities for craft cider and wines in stores and farmers’ markets we are creating more choice for consumers, supporting a local industry and creating good local jobs,” says Jeff Leal, Ontario’s Minister of Agriculture, Food and Rural Affairs.

According to an Ontario government press release, imported and domestic wines will be sold at up to 150 grocery stores. In addition, up to 150 existing winery retail stores that are currently just outside a grocery store checkout will be able to operate their store inside that grocery store, with a shared checkout, and broaden their selection to sell the wines of any Ontario producer. Ultimately, this means that eventually up to 300 grocery stores will sell beer, cider and wine.

“Finally, people in Ontario will be able to buy their wine and groceries at the same place, at the same time, at the same checkout,” says Wynne. “This is a win-win-win scenario — more choice and greater convenience for Ontario’s wine lovers, increased opportunities for Ontario’s winemakers and the many farmers who support them, and a brand-new sales channel for wine producers from around the world.”