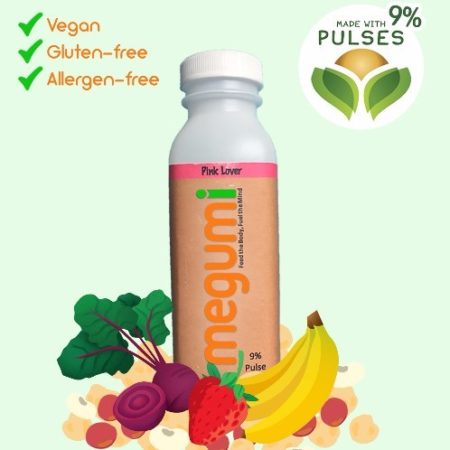 Megumi - 2017 National Mission: ImPULSEible winning entry. Megumi is made with fermented chickpeas, navy beans and red beans. One serving of Megumi provides you with 24% of your daily intake of dietary fibre and 11 g of protein. (CNW Group/Pulse Canada)

The products stood out because they met the tricky requirements the competition asks for: in order to use the Pulse Brand pulses must be in the top five ingredients by weight and they must make up at least five per cent of the final product.

And this year, participants were tasked with creating products that would appeal to millennials, the 18 to 35 year olds.

In a statement, Pulse Canada says first place went to a beverage that “provides 11 g of protein and 24 per cent of the daily recommended intake of dietary fibre.”

The nutrient-dense, prebiotic drink is called Megumi and it’s made from fermented chickpeas, navy beans and red lentils.

The team behind the winning product is Jon Geneau, Kathleen Chan, Marvi Carandang and Yuka Yamazaki from Mount Saint Vincent University in Halifax.

The statement says the beverage also contains significant amounts of vitamin C, iron and calcium. And it’s naturally sweetened because of the fermentation process. It doesn’t have sugars or sweeteners added to it.

The team took their idea from a drink found in Japan called amazake, which is made with fermented rice.

After trying several flavour combinations, says the statement, “the team settled on ‘Pink Lover,’ which combines fermented pulses and rice with strawberries, bananas and beets.”

Second place went to a product called Easy Peasie, an alternative to peanut butter that’s made from roasted chickpea and green lentil flour. The team behind this are students from the University of British Columbia.

Third place went to a product called Lentola, a granola bar with a curry flavour that’s made with roasted lentils and chickpeas. The team behind this product are students from the University of Alberta.

Pulse Canada held provincial competitions earlier this year in BC, Alberta, Manitoba and Atlantic Canada. The winners from these competitions were invited to compete at the national event.

The statement says “18 student teams from six schools from across the country used pulses to develope a delicious and healthy food product that ranged from desserts to snack foods to entrees.”

Pulse Canada launched Mission: ImPULSEible in 2009 as a way “to ensure that pulses are on the radar of the next generation of food product developers and chefs.”