Up to 80,000 jobs would be lost if Canada gives up supply management: report

Canada's egg and chicken producers are asking the government not to use supply management as a bargaining chip in NAFTA talks; the risks are too great 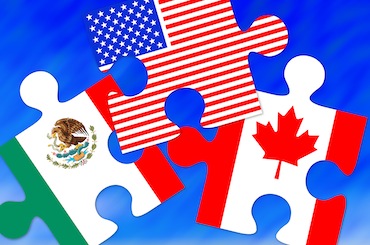 Montreal – La Coop fédérée had a warning for negotiators of the North American Free Trade Agreement: “the Canadian supply management system should not be used as a bargaining chip.”

The company released a statement saying that removing supply management would seriously harm economic and social impacts for many parts of Canada.

According to the study, says the statement, one of the effects of not having supply management would be “far fewer products from local producers will be available to consumers.”

Another effect would be “a market share loss of 80% to 90% of Canadian egg production, which will leave them with 10% to 20% of the current market, whereas the market share for chicken production may decrease by 40% to 70%.

The organizations also predict that the “vast majority of the Canadian turkey industry may disappear.”

Canadian GDP would experience a decrease ranging from $4.6 billion to $6.3 billion.

Consumers on the other hand may see prices drop but the decrease will be “moderate,” say the organizations.

Consumers will see more eggs and chicken from the U.S. flooding the Canadian market; and provinces will likely lose egg and chicken production and that also means the loss of jobs.