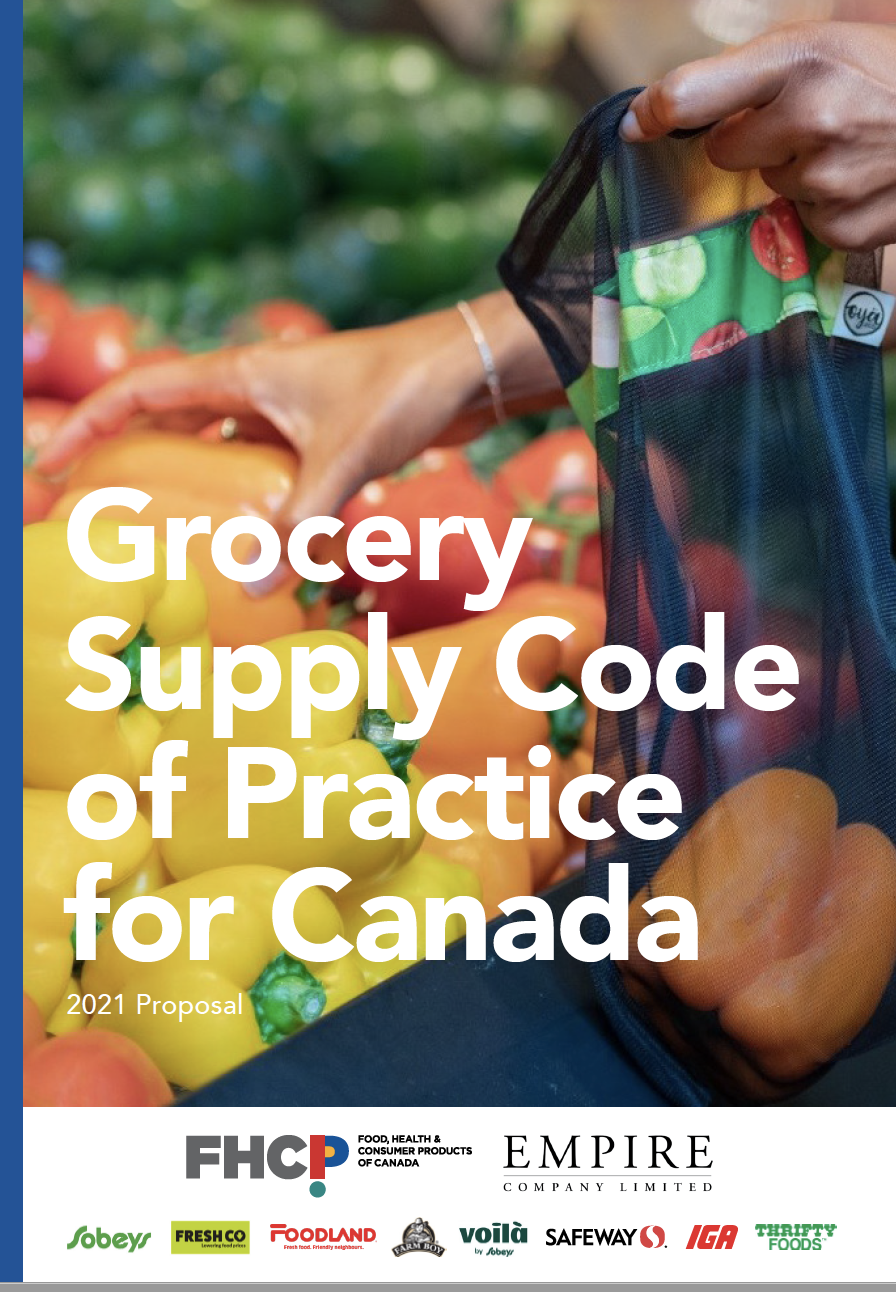 Today, Empire Company Limited, Canada’s second-largest grocery retailer, and Food, Health & Consumer Products of Canada (FHCP), have agreed to a ground-breaking proposal for a Grocery Supply Code of Practice for Canada. This proposal is the first of its kind in Canada and aims to stabilize relations between retailers and suppliers by calling for fair and efficient handling of all negotiations and commercial agreements.

FHCP and Empire encourage other grocers, suppliers and industry stakeholders to come forward to support and provide input into this proposal.

The draft Code aims to stabilize relations between retailers and suppliers by calling for fair and efficient handling of all negotiations and commercial agreements. The FHCP has been advocating for a Code for the last two decades, as a result of complaints of unfair practices in the marketplace relating to issues such as arbitrary fees, cost increases imposed without notice, and late payments.

Empire agrees with the FHCP that the negative ripple effects from poor retailer-supplier relations make their way to consumers and can impact pricing, product choice and job opportunities in Canada. Ultimately, these practices create very challenging conditions for suppliers and manufacturers to thrive in Canada. The proposed Code will create an environment with more certainty and transparency, where suppliers can confidently invest in products, facilities, manufacturing and job creation in Canada.

“The Canadian grocery industry made unprecedented strides in navigating the COVID-19 pandemic as retailers and suppliers collaborated to protect the food supply chain and support customers like never before,” said Michael Medline, President and CEO, Empire in a release. “This goodwill was a positive development during a difficult time. Let’s not go back to the old way of doing things. We began working in earnest with the FHCP on this values-based proposal in the fall of 2020. We hope our principled proposal will be a springboard to move our industry forward. This Code is a win for consumer product companies and retailers, as well as all other players in the food supply chain, including farmers and customers.”

The principles within the Code promote transparency, predictability and openness. By improving collaboration between the business partners, the Code will provide suppliers with certainty by setting out standard rules of engagement between the parties. The Code enshrines a set of good-faith industry business principles, such as requiring written agreements between large retailers and suppliers, ensuring changes to business terms are not imposed arbitrarily.

“As the early days of the pandemic proved and as FHCP and Empire demonstrate so clearly today, grocery retailers and suppliers are capable of tremendous achievements when we collaborate,” said Michael Graydon, President and CEO, FHCP. “Retailers and suppliers are tough and savvy and our businesses do not always see eye to eye. However, we believe we can build a supply chain on mutual trust, one that treats businesses of all sizes fairly and delivers for all Canadians who count on us every day. FHCP and Empire are proud to have translated this common vision into a set of shared principles and a positive framework for the industry.”

The basics of the Code:

The Code was formally submitted today (March 25, 2020) to the Federal, Provincial and Territorial (FPT) Working Group.

The Code was crafted to suit the needs of the Canadian market while taking lessons from relevant international precedent, most notably the UK Groceries Supply Code of Practice.