CN halts rail traffic in East due to protests 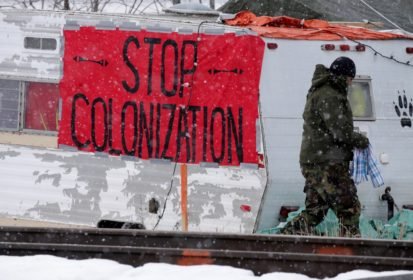 Canadian National Railway (CN) is shutting down its Eastern Canada operations due to ongoing blockades on its rail lines in Ontario.

The company announced Thursday it’s been “forced to initiate a disciplined and progressive shutdown” in the region, which means “stopping and safely securing all transcontinental trains across its Canadian network.”

The decision “may imminently lead” to temporary layoffs in the region, the company added.

The blockades, now in their seventh day, stem from protests against construction of a Coastal GasLink pipeline in British Columbia and have disrupted both freight and passenger traffic.

The protests across the country are in support of hereditary chiefs of Wet’suwet’en Nation, who assert authority over traditional lands through which the natural gas pipeline is meant to run. The community’s elected officials and other elected band councils along the route have publicly supported the Coastal GasLink project.

As court orders have been issued and enforced, CN said Thursday, blockades have come down in Manitoba and “may be ending imminently” in British Columbia.

Similar orders in Ontario, though, “have yet to be enforced and continue to be ignored,” the company said.

CN CEO JJ Ruest, in a release Thursday, described the move as the “responsible approach to take for the safety of our employees and the protestors.”

Over 400 CN trains have been cancelled during the past week and new protests have appeared “at strategic locations on our mainline,” he said.

The shutdown process, he said, will take place in a way ensuring CN is “well set up for recovery, which will come when the illegal blockades end completely.”

Grain Growers of Canada on Thursday called for the federal government to seek a resolution to end rail delays caused by the blockades.

Such delays “will have immediate, unintended consequences for farmers across the country,” GGC chair Jeff Nielsen said Thursday in a separate release.

“Grain farmers should not be held hostage through this issue,” Daryl Fransoo, a Saskatchewan director with the Western Canadian Wheat Growers, said in a separate statement Wednesday. “We call upon the federal and provincial authorities to enforce the law, and clear the blockades.”

Industry group Fertilizer Canada also called Thursday for the federal government and provinces to either “resolve the dispute with Indigenous people or enforce the law of the land.”

“We were already facing a challenge to help farmers catch up and get the fertilizer they need in time for seeding in April and May,” Fertilizer Canada’s CEO, Garth Whyte, said in a release. “They can’t afford this kind of chaos.”

Inter-city Via Rail will also be halted, CN said Thursday, but commuter rail services such as southern Ontario’s Metrolinx and Montreal-based Exo can keep operating on CN tracks “so long as they can do so safely.”

Exo said Thursday it plans to continue to provide shuttle buses instead of its exo4 Candiac rail service as demonstrators have blocked a Canadian Pacific Railway (CP) track it uses. — Glacier FarmMedia Network