A study out of Oregon State University finds that canned peaches offers all the nutritious benefits of fresh, perhaps even more

Corvallis, Ore. – A study from Oregon State University found that canned peaches are as nutritious as fresh ones.

The study was recently published in the Journal of the Science of Food and Agriculture.

The team of researchers, reports NPR.org, also found that in some cases the canned peaches “pack more of a nutritional punch.”

Christine Bruhn, a food scientist at the University of California, Davis, told NPR.org, that the reason some of the nutrients are higher in canned peaches is that the “canning process opens the cell walls of the fruit’s flesh, and it makes nutrients such as vitamin A more readily available to our body.”

Bruhn adds that it’s the same reason there tends to be higher levels of lycopene in tomato sauce compared with fresh tomatoes.

Peaches are picked and packed at the peak of their freshness, says NPR.org. The key is choosing canned peaches that are packed in their own juices, not in a syrup.

NPR.org adds that peach growers did not at all influence the research. In fact, Bob Durst, a lead author of the research, told NPR.org that the researchers would publish the results, regardless of what they found.

The article adds that the heat of cooking can inactivate enzymes that degrade nutrient content. So, in this regard, heat is a plus.

But on the other hand, cooking also exposes the fruit to oxygen, which can destroy the nutrients, says NPR.org. Durst says he’d have to test a food baked with peaches to know for sure.

Photo from the Ontario Ministry of Agriculture and Food

Is Organic Really Better for You? 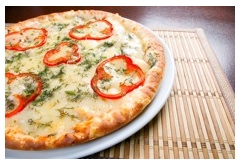 Researchers give pizza a healthier makeover