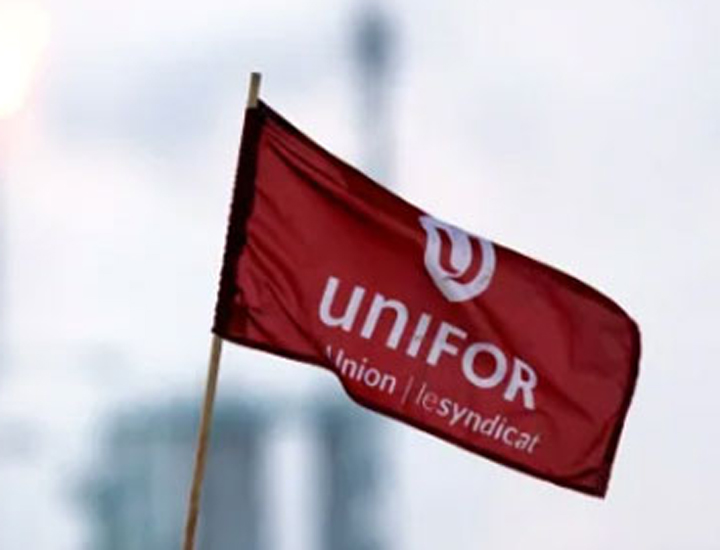 June 22, 2020, Toronto, Ont. – Unifor members from across Canada came together for a virtual rally recently in support of grocery workers who have seen their pandemic pay cut.

“It has become clear, based on governments, based on the employers, that the respect that our members are shown by consumers is certainly not shown by the corporations,” Unifor national president Jerry Dias said in the rally, streamed live on Facebook from four different cities. “We are fighting to make sure the pandemic pay stays.”

News of the pay cuts was quickly followed by word that the Ontario government was considering taking away all but three statutory holidays for retail workers, leaving only Christmas, Good Friday and Canada Day. The proposal was quickly dropped in the face of negative reaction from the public on social media.

“Think about who we are talking about,” said Unifor Ontario director Naureen Rizvi. “It’s your neighbours who often work there, your friends, children of those you know, these are who we are talking about today. Those workers got up each and every day, they came into work, despite the fear and despite the risk of contracting COVID-19, to keep our food supply system moving.”

Loblaw was the first to announce it would end the $2 premium paid to workers in its grocery stores, and was soon followed by other major retailers, including Metro and Sobeys.

“These are workers just doing their jobs, doing their duty,” said Unifor Atlantic regional director Linda MacNeil. “They remind us what it is to be selfless. And to act for the greater good.”

“The fact is, we always work hard. Harder and harder every year, to keep this company profitable. Yet our wages barely move. Our benefits hardly improve. Our jobs grow more precarious,” said Carolyn Wrice, Unifor Local 597 president in  Newfoundland.”

Unifor is Canada’s largest union in the private sector, representing 315,000 workers in every major area of the economy, including 20,000 in the retail and wholesale sector.