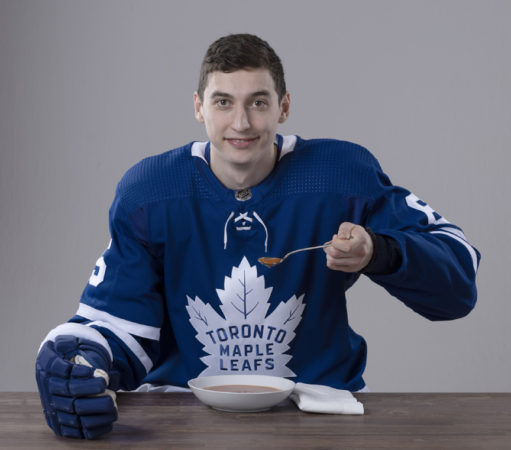 After proclaiming his love of soup, the Toronto Maple Leafs player has signed a deal with Campbell Canada.

It all started with a post-game interview, where Mikheyev was asked about his biggest challenges of moving to Toronto from his native Russia. One challenge was learning English, but he also wondered why Canadians don’t eat more soup.

He said in an interview, “Yes. I like soup. I don’t know why you don’t eat soup.”

Mikheyev’s statement quickly went viral, with the winger being dubbed by fans and teammates as “Souperman” or “Soupy.” Many memes and light-hearted gifs made their rounds on popular social media platforms, inspiring fans to dig into their favourite soups.

Fans even created a celebratory move for Mikheyev where each time he scores a goal, they pretend to slurp a big spoon of soup.

Not long after that, fans on social media and major daily newspapers began calling for a partnership between Mikheyev and Campbell’s.

Campbell Canada heeded the calls, opening the door for a natural and organic partnership with the Maple Leafs player that will include digital advertising, social media, game integration, in-store point-of-sale signage, contests and appearances.

“It made sense. He’s a great guy, and really well-loved by his teammates and fans,” says Kristen Knox, director of marketing at Campbell Canada. “Hockey and soup are such Canadian staples, and when these worlds came together, there was no question we wanted to work with Mikheyev.

“His passion for the sport and everything from our Classic Chicken Noodle to Creamy Tomato Soup is genuine. When you have something like that, it’s a winning combination that can’t be ignored. The Toronto Maple Leafs were able to bring it all together with some fun activations planned for the rest of the hockey season.”

“An organic partnership, such as this one with Campbell’s, is always our goal,” said Jordan Vader, vice president, global partnerships at MLSE. “When a partnership aligns with our team, and especially a player, it resonates more with our fans and they are able to truly enjoy all the benefits that come with it.”