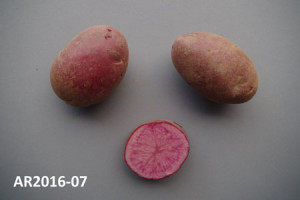 Agriculture and Agri-Food Canada (AAFC) has just released 16 new varieties of potatoes for 2016, one of which is a striking pink colour.

The new potato varieties were unveiled on February 10 at events in Guelph, Ont., Frederiction, N.B. and Lethbridge, Alta.

As noted in a CBC News report, the current crop of potatoes was narrowed down from over 120,000 hybrid seedlings, according to the AAFC. Those seedlings were grown, tested, bred with other varieties, measured and tested again in order to isolate the genes that make these potatoes more appealing.

The CBC report also notes that researchers are trying to breed potatoes that produce better yields, are more resistant to pests and diseases or are easier to process, while also looking for better nutritional value and desirable cooking qualities.