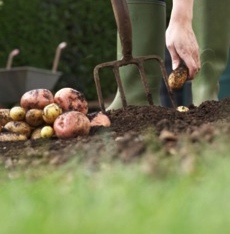 In a story that ran in late February, the paper reports that the new potatoes will offer different tastes, colours and textures. The new colours include purple, red and yellow.

The potatoes are also healthier, with antioxidant levels that are about half of what is in a blueberry.

While that may not sound significant at first, says the Telegram, it becomes so when you consider that the average Canadian eats 32 kg of potatoes per year, compared to 700 g of blueberries.

The Culinary Institute of Canada at Holland College in Charlottetown, P.E.I. and the BioPotato Network are working together on these projects, with the aim of creating “foods that are inviting yet are made in such ways that their health benefits are maintained.”

The paper reports that there is a high interest in the red potato as chefs and consumers like the idea of putting more colour on their plates.

Producers will get two years to work with the potato varieties. After that, they can bid to get exclusive use of the variety for up to five years.