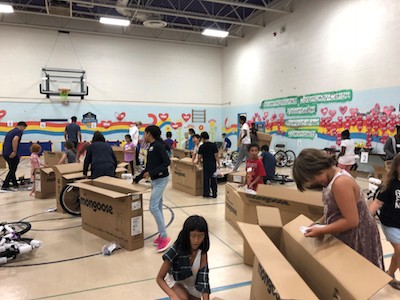 “It was like Christmas morning” as 100 children, ages six to 12, scurried to recently unwrap the large boxes at the Boys & Girls Clubs of Eastview and East Scarborough in Toronto. Inside were the parts – wheels, handlebars, gears and more — that would in turn shift the lives of so many children.

The annual Mondelēz Canada Bike Build, which was established in 2015, has helped to provide 400 new bicycles to Boys and Girls Club youth. For many of the children throughout the Toronto community, the dream of owning their own bike was something they could not have imagined. The impact is real as hundreds of kids not only have a fun new form of transportation, but also are proud to say they built the bicycles themselves. “My twins are in heaven as it is so nice for them to have a new bike of their own,” said Theresita Kasahonda-Culebra, a parent in the Eastview neighborhood. “Usually their dad pieces something together from found items or hand-me-down parts. They felt so empowered putting their own bikes together and helping others.” Volunteers from Mondelēz Canada were paired with 100 children on August 23 (Eastview Boys & Girls Club) and August 28 (Boys & Girls Club of East Scarborough) to assemble the many parts into a high-quality bicycle. To ensure the young riders were well prepared for city riding, Pacific Cycle donated bicycle helmets and the local Toronto Police division led safety workshops while three independent business owners (Steve Rabjohn, Dex Prandovszky and Franc Lockyer) of Velofix, performed mechanical safety checks on every bike.

“This is the fourth year we have teamed up with Mondelēz Canada on the annual Bike Build and we have seen it make an incredible and very positive impact on Boys & Girls Club children and the surrounding communities,” said Janath Vesna, manager of National Programs, Boys and Girls Clubs of Canada. “In addition to the gift of new bicycles, the kids learn self-esteem and leadership which is consistent with the core values of Boys & Girls Clubs.”

From children riding their bikes to school for the first time to families that are now able to exercise together and visit the beach, boardwalk or park, the Mondelēz Canada Bike Build has changed the landscape of how children are able to get around the community and enjoy time with family and friends. For instance, in East Scarborough many of the youth feel better connected to the community since they can take advantage of the Toronto bike path that is now extended into the area.

“The Bike Build has been especially important to the community of Eastview as residents typically do not get in their cars but instead stay in the immediate area to do things,” said Laurette Jack, Children’s Program coordinator, Eastview Boys & Girls Club. “In turn, bicycles and scooters have become an integral form of transportation for community residents of all ages.”

As a result of the Bike Build, entire families are benefiting as one new bike in the house can mean that a quality bike will be handed down to siblings for years to come. “I love riding my new bike and that we got to build the bike,” said Julissa Blackstock, 10 years old, East Scarborough Club member.

“To see the pride on the boys and girls faces when they have completed building their bike is only topped by the sheer joy and excitement I witness later in the day when they show their families,” said Kim Zichy, administrative assistant, Corporate & Government Affairs, Mondelēz Canada. “They are so excited to reveal what they have built and that it is their own to take home. Their smiles just make your heart skip a beat!”

The inspiration for the annual Bike Build with Boys & Girls Clubs comes from a Mondelēz Canada initiative called The Bicycle Factory that encourages Canadians to build bikes online. The virtual bicycles are then turned into real bikes for kids in rural Ghana, making it easier for them to get to school and gain a valuable education. “We have a saying at the Boys & Girls Club that ‘nothing beats lifting spirits’ and the Mondelēz Canada Bike Build program is an excellent time for us to engage in community stewardship with volunteers that provide mentorship and a lesson for our children in modeling their behavior,” said Utcha Sawyers, Executive Director, Boys & Girls Club of East Scarborough. The Bike Build is part of the Mondelēz Canada Cool Moves program that encourages a life-long appreciation for healthy, active lifestyles for Boys and Girls Club members eight to 12 years of age. Since 2004, Mondelēz Canada Cool Moves has been a national activity and healthy eating awareness program based on Play Cool (increasing physical activity) and Eat Smart (increasing healthy eating habits and nutrition awareness), while providing several resources to help Clubs engage children in developing healthy habits for life. The unique program is designed to build endurance, flexibility and strength while promoting learning about healthy eating, encouraging the sharing of ideas and supporting healthy food choices. “With only nine per cent of Canadian kids getting the recommended one hour of physical activity each day, programs like the Mondelēz Canada Cool Moves and Bike Build are especially important,” added Vesna. Cool Moves is active in 12 Boys & Girls Clubs across Canada including: Alberta, Manitoba, Ontario, Quebec, Newfoundland, Nova Scotia and PEI. To date, nearly 22,000 children and youth in Boys & Girls Clubs have participated in Cool Moves, impacting 50 communities across Canada.