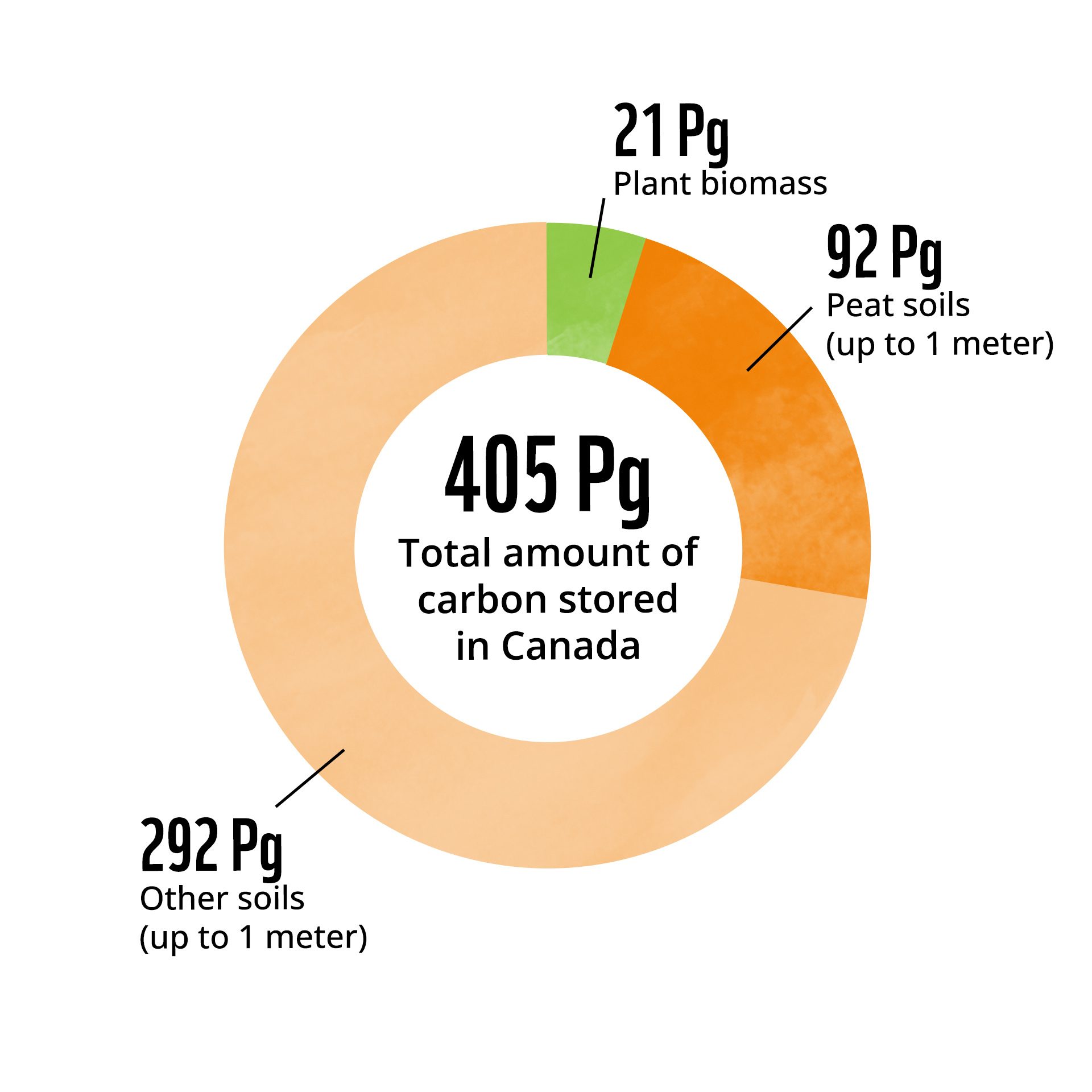 A new study by WWF-Canada, led by researchers at McMaster University’s Remote Sensing Laboratory, and supported by Maple Leaf Foods and the Metcalf Foundation, reveals, for the first time, how much carbon is stored in Canada’s landscapes, and the locations of the most carbon-rich areas.

It found a total of 405 Pg — that’s 405 billion tonnes — of carbon stored in ecosystems across Canada, the equivalent to about 30 years of human-caused global greenhouse gas emissions, at 2019 emission levels. The findings have been mapped to show the density of carbon — in different geographic locations — in trees and other plants all the way to 2 m below ground.

It’s the first-ever comprehensive analysis of its kind and has major implications for conservation actions – particularly as a tool for guiding nature-based climate solutions.

The findings show that 95 per cent of carbon in Canada is found in the top 1 m of soil, with 24 per cent of that found in peatlands. This indicates that a quarter of the world’s soil carbon stock is found in Canada, a disproportionate amount that brings with it a global responsibility. The rest of Canada’s carbon is found in plant biomass (trees, other plants, dead plant material and roots).

Areas of particularly high densities of carbon include the old growth forests of coastal British Columbia, large swaths of boreal forest and the globally significant peatlands in the Hudson and James Bay Lowlands.

High-carbon landscapes play an important role in regulating the Earth’s climate by removing carbon from the atmosphere and storing it in natural ecosystems. If these ecosystems are disturbed, the stored carbon can be released back to the atmosphere, accelerating climate change.

“The findings of this study are monumental for conservation in Canada, and across the world. Knowing where carbon is stored in Canada allows us to strategically protect and manage the right places to prevent billions of tonnes of carbon from being released into the atmosphere. Protecting these areas will also benefit wildlife by safeguarding habitat for important species at risk,” says Megan Leslie, WWF-Canada president and CEO.

WWF-Canada has recommended several actions based on the study’s findings, including methods for avoiding the conversion or degradation of carbon-rich landscapes, as well as creating a Carbon Guardians program to support interested Indigenous communities in monitoring and measuring ecosystem carbon on their lands.

“The results of this new analysis come at a pivotal time for action. There is a great opportunity and responsibility for Canada to steward these important carbon storage areas for the global climate, and do so in a way that supports and empowers Indigenous Peoples’ rights, knowledge systems and cultures,” says James Snider, vice-president of Science, Knowledge and Innovation at WWF-Canada.

“As increased carbon emissions and other greenhouse gases are a major accelerator of climate change, Maple Leaf Foods is proud to support this groundbreaking research alongside WWF-Canada, the Metcalf Foundation and McMaster University,” said Tim Faveri, VP, Sustainability and Shared Value, Maple Leaf Foods. “As the first major carbon neutral food company in the world, we recognize the study’s significance in deepening understanding of how to prioritize future conservation and soil regeneration efforts. This baseline is vitally important to the future generations of all Canadians.”