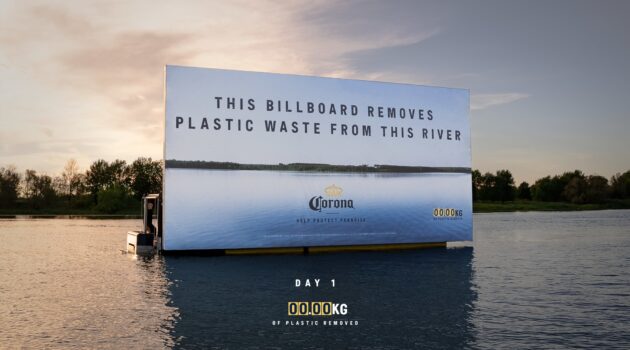 Day one of the Corona Plastic Collecting Billboard launching in Boucherville, Que. Follow along @CoronaCanada for regular updates on the amount of waste collected by the billboard. (CNW Group/Corona Canada)

“Since one-fifth of the world’s freshwater resources are located in Canada, the goal of the Plastic Collecting Billboard is to act as a symbol to raise awareness of the pollution rivers endure – ultimately flowing into the ocean – and to reinforce Corona’s commitment to helping remove waste from our shorelines and waterways,” said Mike Bascom, sr. marketing director, Corona Canada. “As a brand that was born at the beach, Corona is invested in helping to protect Canada’s natural environment, which is why we continue to launch initiatives – like the Plastic Collecting Billboard – to help educate and encourage Canadians to take action to reduce their plastic pollution.”

Additionally, with expert advice provided by Ocean Wise, Corona has created an online tool, the Corona Plastic Challenge, that will help Canadians understand the impact of their own plastic pollution footprint and provide helpful tips on how to reduce single plastic use.

The Corona Plastic Challenge tool is able to calculate an approximation of the user’s plastic footprint by prompting them with a series of questions about consumption, garbage disposal process and general daily habits. Based on the answers provided by the user, the tool is then able to calculate an approximate number of kilograms of plastic the user is responsible for, per year.

“In addition to collecting waste from the St. Lawrence River in Quebec, Corona’s Plastic Collecting Billboard program will provide our team at Ocean Wise with some information, during the time the billboard is operating, that can be used to help quantify how much plastic pollution is flowing through the St. Lawrence River,” said Jeff Wint, plastic reduction manager, Ocean Wise. “As a result, we can hopefully start to get an idea of the items being littered, types of plastic, and their sources.”