A world first! The first off-farm circular meal is now available at Guelph, ON restaurant 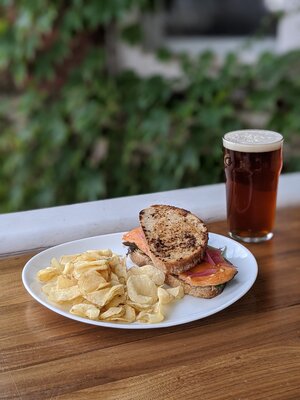 Provision Coalition explains that it all starts with beer. Specifically, with the waste grain from the brewing process. The grains are upcycled as feedstock to an insect farm that produces animal feed, which then goes to a trout farm. The insect and fish poop become natural fertilizer for potatoes. And some of the grain that the insects can’t take goes to a baker with waste yeast from a yeast lab to produce bread.

The result? A hot-smoked steelhead trout on a sourdough with potato chips and a pint of beer. A fully circular meal, served for an entire month by Canada’s largest B-corp restaurant chain.

Thursday Oct. 15th was the virtual launch event attended by four levels of government. A video was shown that explained how the first Re(PURPOSE) circular meal was created. And it all starts with beer. Specifically, with the waste grain from the brewing process. The grains are upcycled as feedstock to an insect farm that produces animal feed, which then goes to a trout farm. The insect and fish waste become natural fertilizer for potatoes. Some of the grain that the insects can’t use goes to a baker with waste yeast from a yeast lab to produce bread. And all of the ingredients go to three restaurants that create three variations on a theme – from fish and chips to trout gravadlax on sourdough crostini – all entirely circular.

Cher Mereweather, the President & CEO of Provision Coalition said, “At every stage in the journey from field to fork there are by-products: peels from potatoes, grains from brewing, pulp from juicing. And while some may see these peels and pulp as compost or waste, we see opportunity: nutrients, ingredients, even new products. Re(PURPOSE) is about seizing that opportunity – taking these unavoidable waste by-products and repurposing them to create new circular food products and experiences – new products and promotions in stores, new menu items in restaurants and for home delivery”.

Senator Rob Black, who has been an active supporter of the project, added “This is the first time that a meal has been created entirely from waste products – to the eight companies from Wellington County and surrounding region, I thank you for your part in this historic collaboration. I am confident that this represents the first step towards a new world where waste is not looked at as a problem to get rid of but instead of looked at as an opportunity to start something new”.

The meals are currently available at three restaurants in Guelph, Ontario. A new website has been launched – www.repurposebyprovision.ca that provides details on all the participating companies and restaurants.

Provision Coalition is a team of food sustainability experts, based in Guelph, Ontario. They work across North America to help food and beverage companies become more sustainable and circular. The team is led by Cher Mereweather, a 20-year veteran of food sustainability who has made tackling food waste one of her career goals.

Re(PURPOSE) is a new initiative of Provision Coalition to create collaborations between companies at different levels of the food chain so that the unavoidable waste by-products from one company can become the ingredients and inputs for another company to create new circular products or food experiences. Re(PURPOSE) is designed as a movement, whose goal is to create collaborations across North America and measure the waste that is saved each year. It is also targeted towards consumers and restaurant-goers to encourage them to choose circular products and meals and the restaurants and retailers that support them.