Researchers in Brazil have found using green banana flour to make pasta is appealing to all consumers, but especially those with celiac disease

Rio de Janeiro, Brazil – Researchers at the University of Brazil have stumbled upon an ingredient that may give people with celiac disease more options.

Science Daily.com reports that the researchers developed a gluten-free pasta product from green banana flour, and discovered that tasters found it more acceptable than regular whole-wheat pasta. The pasta product also has less fat and is cheaper to produce than standard pastas.

Their research was published in the Journal of the Academy of Nutrition and Dietetics.

The lead investigator, Renata Puppin Zandonadi, PhD, says there was no significant difference between the modified pasta and standard samples in terms of appearance, aroma, flavour, and overall quality.

She went onto say that, “Green bananas are considered a sub-product of low commercial value with little industrial use. For banana growers and pasta product makers, there is the possibility of diversifying and expanding their markets.”

Researchers compared a standard whole-wheat pasta preparation made from whole-wheat flour and whole eggs with one made from green banana flour, egg whites, water and gums, reports Science Daily.com.

The alterations reduced the fat content and increased the protein value of the modified pasta, which is important because gluten removal typically reduces some proteins responsible for some sensory characteristics of pasta products.

The egg whites and gum result in pasta that is less sticky than typical gluten-free pastas and promote firmness, elasticity, moisture and uniformity.

The modified pasta decreased fat content by more than 98 per cent. This reduction is particularly important to patients with celiac disease, because many gluten-free products compensate for the removal of gluten with high levels of lipid content.

Tasty enough for a wider market

Fifty testers who did not have celiac disease and 25 celiac disease patients compared the pastas. In both groups, the modified pasta was better accepted than the standard in aroma, flavour, texture, and overall quality, indicating that the product can possibly be commercialized to a wider market than just those with celiac disease.

The modified pasta had a high quantity of resistant starch, which may help control glycemic indexes, cholesterol, intestinal regularity, and fermentation by intestinal bacteria. “Considering that untreated celiac disease promotes cancer in intestinal cells and a highly inflammatory mucosal status, developing gluten-free products with bioactive compounds such as the ones present in green banana flour is important for celiac disease patients,” says Zandonadi.

“Patients will benefit from ingesting a product with a better nutritional profile made from an ingredient that is produced and consumed throughout the world.” 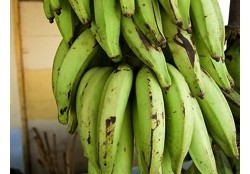