Scientists in the U.S. have come up with a recipe – that includes mostly milk proteins and clay – which makes a biodegradable alternative to Styrofoam and plastic.

Most other options in packing and filling products are derived from oil. These products end up in landfill sites and in many cases, reports the story, either break down slowly or not at all. Though rare, they can also create toxic intermediary byproducts.

Look to the milk

The university team set out to develop a new option and looked to milk as the source.

Milk protein, which is made up of 80 per cent casein, is already used in glue and coating materials.

But this derivative isn’t as strong and exposure to water can easily degrade it.

So the team set out to improve it. They mixed ordinary clay and extra amounts of glyceraldehyde, the molecule that ensures that casein sticks together.

Then they took that substance, freeze-dried it and removed any water. The product was then cured in an oven and stress-tested. The team found that it was strong enough to operate as a packing, stuffing and insulating material.

And it’s biodegradable: 30 per cent of it will break safely down and away in the first 30 days.

The study was published in the journal Biomacromolecules. 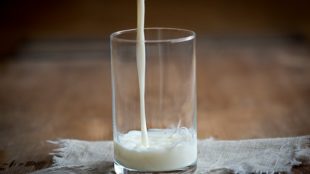 Nutritional value of milk reduced due to store lighting