GreenTech keeps coffee hot, but not too hot 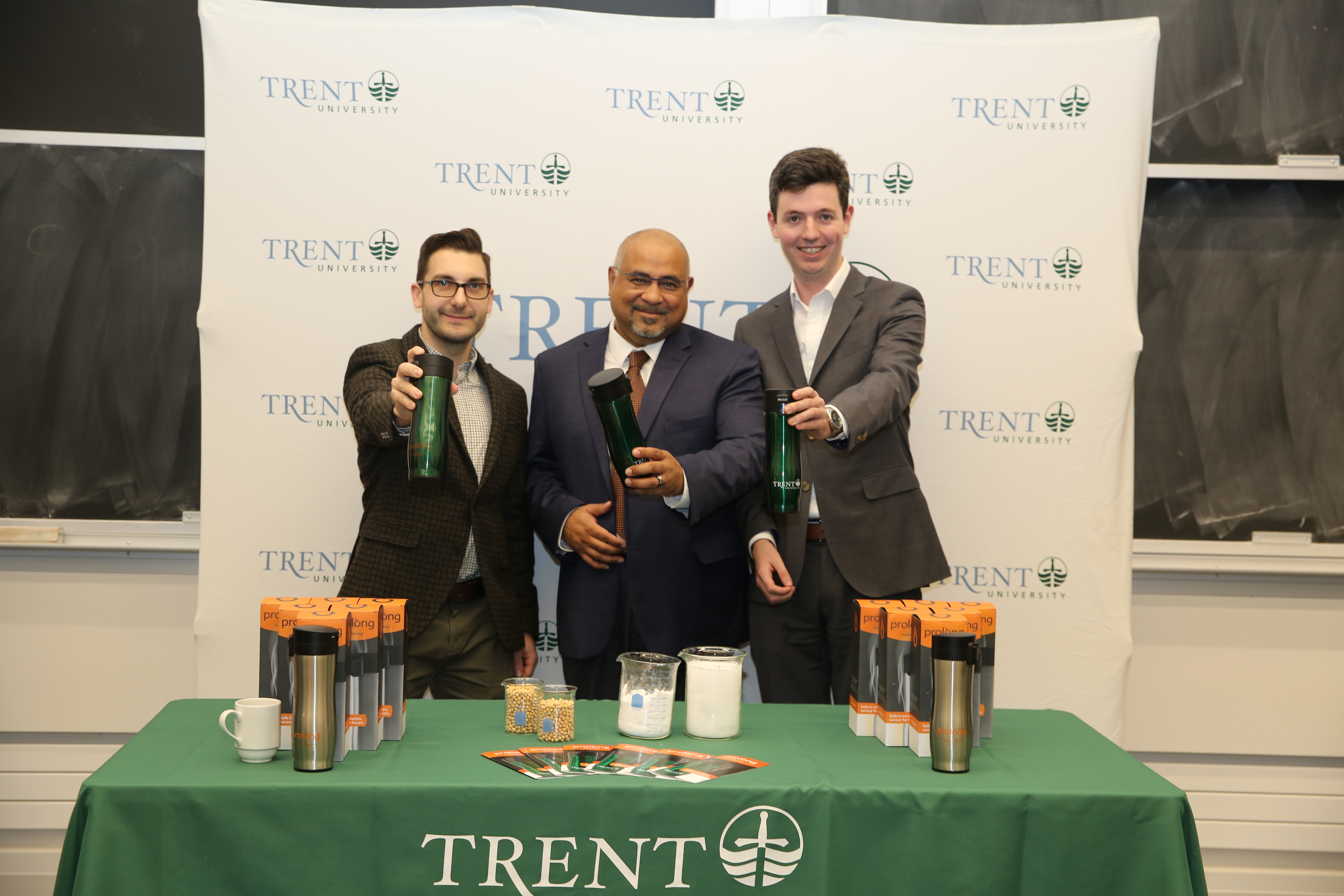 Peterborough, Ont. – When the World Health Organization (WHO) issued a warning in 2016 about the connection between drinking very hot beverages (above 65 C) and esophageal cancer, researchers at Trent University had an unlikely solution: soybeans.

Within months, they developed a travel mug that uses a unique soy-based material inside its walls to cool beverages to safe temperatures within minutes, and maintain the temperature in a perfect range for several hours.

Dr. Suresh Narine, professor in Physics, Astronomy and Chemistry who also heads up the Trent Centre for Biomaterials Research (TCBR), has been experimenting with energy storage properties in lipids. He says the research team developed the material in response to a challenge: how to use biomaterials to store energy, and control how that stored energy gets released.

“We figured out how to design materials that melts or crystallizes at specific temperatures,” says Narine. “It stores the heat when it melts, and when the material crystallizes, it gives that heat back.”

The resulting material – called “phase change material” – contains soybean oil, which is used to capture and release heat. Inside the coffee mug, phase change material cools hot beverages (traditionally 85 C for coffee and 100 C for tea) to 65 C within minutes. The material then works to transfer the energy back, maintaining the hot – but not too hot – temperature for up to several hours.

“Hot beverages are brewed at high temperatures for taste, but unfortunately once the temperature drops to a more drinkable state, it’s not warm for very long. This travel mug will change that,” he says.

The team has completed production on its first commercial mugs, which it will use to seek further industry partnerships and commercial distribution. But Narine says coffee cups are just the beginning. The phase material technology is applicable to food service items such as coffee carafes and serving dishes, as well as larger industrial uses and building materials.

For example, Narine has also used the phase material to develop a prototype for a heater for an indoor swimming pool. The pool is heated when hydro rates are lower, and its heater switches off when rates increase.

Narine has built a prototype unit containing the phase change material that is designed to melt at the desired temperature of 24 C. The material crystalizes when the water temperature begins to drop, releasing the stored heat into the pool water for several hours.

“It levels off the cooling curve of the pool, and over the course of the day, when the heater is off, the temperature only drops a small amount, saving approximately 80 per cent of energy,” Narine says. “By being fairly clever about this, one can significantly reduce one’s environmental footprint.”

Pictured from left to right are: Michael Floros, Suresh Narine and Michael Tessier of Trent University.