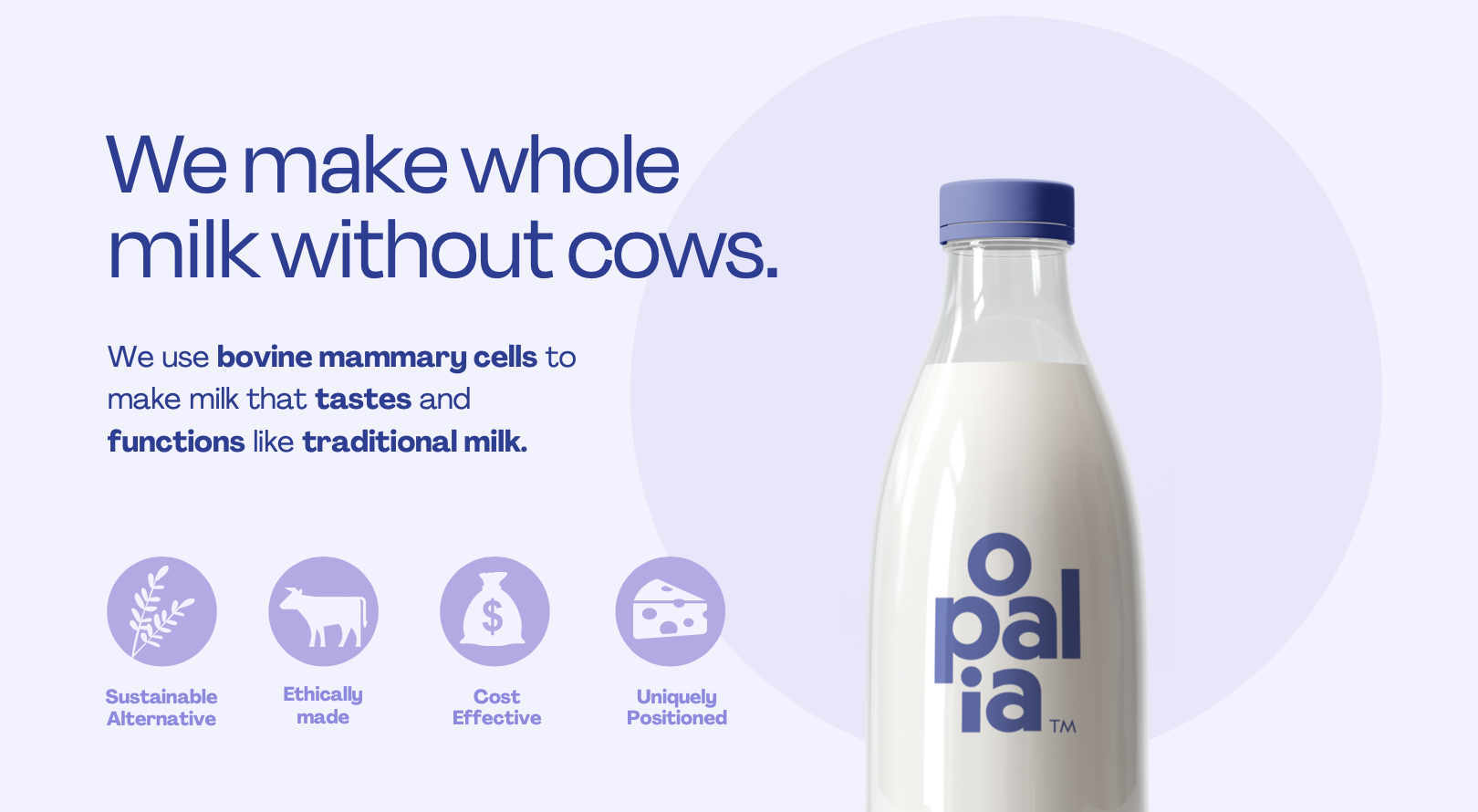 Opalia, an early-stage foodtech company that makes whole milk using mammary cells, has reached a crucial in-lab milestone on its path toward commercialization of animal-free cow’s milk. Today, Opalia announced the elimination of fetal bovine serum (FBS), a commonly used component of synthetic cell growth, from its manufacturing process.
“By successfully replacing FBS with a cheaper, non-animal growth substrate that performs even better than FBS in our cell culture, we have reduced the cost and risk of manufacturing cell-based milk, bringing Opalia one step closer to introducing consumers to no–compromises, animal-free dairy,” said Jennifer Côté, co-founder and CEO of Opalia. “Our new replacement substrate enables Opalia to reliably cultivate mammary cell lines and thereby to cost-effectively scale up production of sustainable and animal-free milk to manufacture fully functional dairy products.”
FBS is extracted from the placenta of pregnant cows and is frequently used to cultivate cells and tissue outside of their normal environment. However, FBS is costly and subject to high levels of batch-to-batch variation that decreases its reliability. It can also easily be contaminated by harmful pathogens.
More importantly, the fact that FBS is extracted from live animals has always made it a non-starter for Opalia. “We are 100-per cent focused on manufacturing an ethically produced dairy product that negates any harm to animals and eliminates the massive environmental impact of traditional dairy production,” added Côté.
Using enhanced mammary epithelial cells that grow and lactate inside a bioreactor that replicates the in-vivo environment of the cow udder, Opalia is able to manufacture all of the functional components of traditional dairy without involving any animals in the process. The replacement substrate used in Opalia’s proprietary process is both FDA-approved and readily available.
Unlike other milk alternatives, Opalia’s animal-free milk contains all of the functional components of traditional cow milk such as the six main proteins (two whey proteins and four casein proteins) and milk fats, that can be dialled in to any desired specifications for an unlimited number of end applications. Opalia’s aim is to partner with companies who use milk in their products to target a wide range of applications from food to cosmetics and pharmaceuticals.
With its bioreactor-based milk production process now powered by an FBS-free substrate, Opalia is now one step closer to upscaling production of its cell-based milk and to engage with downstream partners that are interested in commercialization of the company’s fully functional milk.
Print this page