Are cows getting a bum rap?

Guelph, Ont. – Cows don’t just produce milk and cheese; they can also produce huge amounts of gas – a potent greenhouse gas called methane. But the calculations we use to predict how much they produce are being called into question.

A new study from the University of Guelph in Ontario, the University of Manitoba and Wageningen University & Research Centre in the Netherlands has found that the mathematical equations used in predicting cows’ methane emissions are inaccurate and need improvement if they are to help dairy farmers mitigate the release of greenhouse gases.

Livestock accounts for about 18 per cent of all greenhouse gas emissions, according to the United Nations Food and Agriculture Organization.

Methane is the most important greenhouse gas produced on dairy farms and is 25 times more potent than carbon dioxide.

But, explains the University of Guelph, as delegates from around the world prepare to meet in Mexico later this month to discuss a successor to the Kyoto Accord on climate change, scientists and policy makers continue to debate the causes of climate change. This includes the level of emissions from livestock and fossil fuels.

The researchers behind this study used data from studies in Canada, the Netherlands, and the U.K. to assess how well widely used equations predicted methane production.

There’s “a lot of concern right now about the impact of farming and human life in general on the environment,” says Jennifer Ellis, a Guelph PhD student and lead author of the new paper.

“The prediction accuracy of these equations is small, and the equations are not suitable to quantify methane production of cows.”

Whole-farm models used to estimate the effect of on-farm management changes such as manure and crop management, breeding and basic nutrition don’t account for effects of dietary changes, says Ellis.

For example, the equation currently used by the Intergovernmental Panel on Climate Change fails to distinguish between the effects of simply feeding cows more and the effects of feeding them higher-fat diets, explains Ellis. 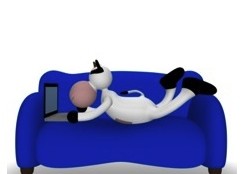