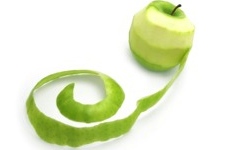 The Institute of Food Technologists (IFT) has reported on a study that looked into the feasibility of adding dried apple skin powder into baked goods. According to IFT, adding apple skin powder to baked goods could boost their fibre content.

Apple fruit skin especially is a rich source of dietary fibre and phenolics.

In the study, researchers used muffins and replaced wheat flour with apple skin powder at different levels – zero, four, eight, 16, 24 and 32 per cent.

What the researchers found was that at the highest level, 32 per cent, the apple skin powder did alter the baking characteristics.

But a panel of 66 taste testers found that replacing wheat flour with eight, 16 or 24 per cent apple skin powder was acceptable.