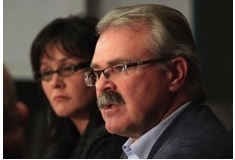 The federal government announced last week that it would invest $75 million in Canada’s food safety system and act on all 57 recommendations made by Independent Investigator Sheila Weatherill.

Weatherill released her report, an investigation into the August 2008 Listeriosis outbreak, this past July.
(See: http://www.canadianmanufacturing.com/foodincanada/news/meatnews/article.jsp?content=20090722_105919_2544.) Where the investment is being made

The feds will invest the $75 million over the next three years. The investment will be made in areas that will improve Canada’s ability to prevent, detect and respond to future foodborne illness outbreaks, says a release on the Canadian Food Inspection Agency’s site.

Under prevention, the improvements include:

• hiring and training an additional 70 ready-to-eat meat inspectors;
• using an independent auditor to conduct a review of what is needed to ensure the Compliance Verification System (CVS) is as effective as possible in overseeing the food safety controls applied in meat processing;
• continuing to support the development, implementation and maintenance of Hazard Analysis Critical Control Point (HACCP) systems in federally-registered meat and poultry establishments;
• reviewing policies, programs, manuals, regulations and directives to ensure they reflect current food safety practices and any changes that have been required of industry;
• increasing awareness and knowledge among the public, including those most vulnerable to foodborne illness, about the health risks associated with unsafe food handling practices and foodborne illness; and
• developing and maintaining a food safety website which will give Canadians a single source of quick, easy access to food safety information to help protect their health and that of their families.

Under detection, the improvements include:

• implementing a national public health surveillance system to improve rapid identification and tracking of potential foodborne illness outbreaks;
• collaborating with provinces and territories to strengthen existing laboratory networks and making steps towards a national network among relevant laboratories of food safety partners;
• developing improved detection methods for Listeria monocytogenes and other microbial hazards in food to reduce testing time and enable more rapid response during food safety investigations;
• analyzing data and identifying trends in reported illnesses to develop and monitor early warning indicators; and
• strengthening the diagnostic tools used in our laboratories to support our ability to trace the origins of food hazards such as Listeria monocytogenes.

Under responsiveness, the improvements include:

• providing 24/7 availability of health risk assessment teams to respond quickly to food safety investigations;
•  strengthening the protocol used by the federal, provincial and territorial governments to respond to foodborne illness outbreaks to include, among other things, simulation exercises to promote response readiness at all levels of government;
• formalizing an "Incident Command Structure," which will help all partners involved in the response to work together under a common command configuration;
• sharing best practices for management of food recall situations among provinces, territories, the federal government, and industry; and
• developing communications and marketing materials to support the delivery of timely information to Canadians.

This new investment builds on the government’s 2008 commitment of $113 million for food safety. Already, the Government has made significant changes to Canada’s Listeria management strategy, including making environmental testing and reporting mandatory in ready-to-eat meat plants.