Steam Whistle adding a new beer to their collection 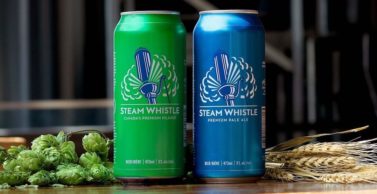 Steam Whistle announced it will be adding a pale ale to join its pilsner, to hit store shelves across Canada later this month. Presented in a blue can — alongside the now-familiar green of the pilsner — the pale ale will also be made according to the exacting standards of the Bavarian Purity Act of 1516, just like its pilsner.

“We have grown to become the No. 1 craft beer in Canada with only one beer,” says Tim McLaughlin, vice-president of marketing for Steam Whistle. “But we have heard loud and clear from our customers that they would like to see more beers from us.”

After reviewing the Steam Whistle brand, the company found that 92 per cent of Steam Whistle drinkers would try another beer from Steam Whistle. While Steam Whistle launched 19 years ago with the mantra of only making one beer, over the past year it has invested considerably in growing the business.

Last year, it opened a production facility in Etobicoke to complement the work at the historic Steam Whistle Roundhouse in downtown Toronto, and that has enabled it to significantly increase its capacity. Since then, it has launched a sister brand, Von Bugle, which produces a German-style lager and has forged a partnership to brew one of the leading craft beers in the United States, Fat Tire Belgium Ale, for the Canadian market.

“In terms of the style of the beer, our pale ale is still easy to drink and crisp, but more hop forward than our pilsner,” says McLaughlin. “We will remain true to our standards of brewing a pure ale with no additives, preservatives or artificial foam enhancers.”