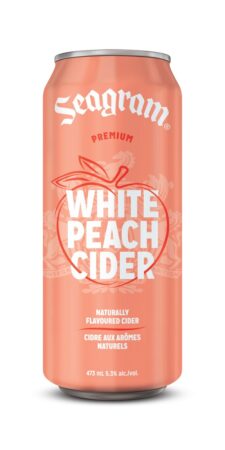 Seagram is growing its lineup with a new seasonal cider, Seagram White Peach Cider. White Peach is based on the same great recipe as Seagram Craft Apple Cider – made with Ontario apples and fermented with champagne yeast, which couples perfectly with ripened juicy white peaches. At 5.3% alcohol-by-volume and made with all-natural ingredients, this summertime cider packs a flavourful punch. It is the perfect grab-and-go refreshment for any warm weather occasion.

“Peach pairs so well with warm weather. It is a hugely popular summer flavour for good reason. Our new Cider reminds you of biting into a fresh picked, full flavoured White Peach”, says Kim Mannerow, Director of Marketing. “We’ve also taken the opportunity to refresh our cider packaging, launching with White Peach cider – it’s so eye-catching, these cans won’t sit on shelves long.

“We believe White Peach is the perfect complement to our Seagram Craft Apple Cider, which has proven to be a favorite with Ontario consumers.” says Jim Manz, Vice President Sales & Key Accounts.

About Waterloo Brewing
Waterloo Brewing Ltd. is Ontario’s largest Canadian-owned brewery. The Company is a regional brewer of award-winning premium quality and value beers and is officially certified under the Global Food Safety Standard, one of the highest and most internationally recognized standards for safe food production. Founded in 1984, Waterloo Brewing was the first craft brewery to start up in Ontario and is credited with pioneering the present-day craft brewing renaissance in Canada. Waterloo Brewing has complemented its Waterloo premium craft beers with the popular Laker brand. In 2011, Waterloo Brewing purchased the Canadian rights to Seagram Coolers and in 2015, secured the exclusive Canadian rights to both LandShark® and Margaritaville®. In addition, Waterloo Brewing utilizes its leading-edge brewing, blending and packaging capabilities to provide an extensive array of contract manufacturing services in beer, coolers and ciders. Waterloo Brewing trades on the TSX under the symbol WBR. Visit us at www.waterloobrewing.com.