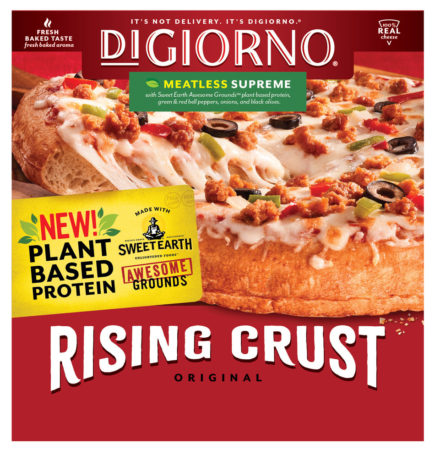 Digiorno Rising Crust Meatless Supreme with Sweet Earth Awesome Grounds and Stouffer’s Meatless Lasagna with Sweet Earth Awesome Grounds will help consumers looking for convenient and meat-free options from brands they know and trust. Similar to the original offerings with real meat, these new recipes have the same product quality, taste and texture.

Consumers are increasingly showing interest in adopting a ‘flexitarian’ lifestyle — making an active choice to incorporate more plant-based meals into their diets, while occasionally eating meat or fish.  In recent years, the demand for meals made with meat alternatives has gone mainstream. According to a consumer survey commissioned by Nestlé USA, nearly half have either integrated plant-based meat into their diet or would consider doing so long-term and three in 10 who have not yet tried plant-based meat responded that would do so if they had the opportunity. Nearly half also say that they would be very likely to try plant-based meat if used in pizza or lasagna.

Acquired by Nestlé in 2017, Sweet Earth is the creator of dozens of plant-based offerings, including the Awesome Burger and Awesome Grounds, which both launched in supermarkets across the U.S. in October. Awesome Grounds are made from textured yellow pea protein, wheat gluten, canola oil coconut oil, and other fine ingredients and contains 16g of protein and 4g of fibre per serving.

These products will be available in retail starting in spring 2020.