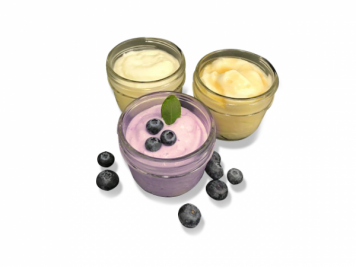 Located on a family-owned dairy farm near New Hamburg, Ont., Mountainoak Cheese specializes in traditional Dutch-style Gouda cheeses made with milk from their own cows. Quark is a mild, unripened cheese that’s similar in taste and texture to Greek yogurt, said Adam van Bergeijk, Mountainoak co-founder and president.

“Quark has been well-known in the Germanic parts of Europe for centuries, but it’s relatively new to North America,” said van Bergeijk, who emigrated to Canada in 1996 with his wife Hannie and family. “Quark is a delicious, nutritious alternative to more fatty creams and yogurts and a rich source of protein that’s very popular among high-performance athletes and other diet-conscious individuals, as well as us regular folks.”

Mountainoak Plain Quark is made with just three ingredients: pasteurized whole milk, bacterial culture, and rennet. It has double the amount of protein found in Greek yogurt, and contains a blend of “good” bacteria that are easier on the digestive system than regular cheese or yogurt. With no added salt or sugar, Plain Quark is also high in calcium and a good source of vitamins A and B. It can be used in a wide range of sweet and savoury recipes as a substitute for cream cheese, yoghurt or cottage cheese. It’s a great breakfast option mixed with fruit and granola or spread on toast.

Mountainoak Quark is available in three flavours: Plain, Maple Syrup and Blueberry. The maple syrup and blueberries are also sourced locally from neighbouring farms. A strawberry version, using locally grown berries, is planned for this summer.

Mountainoak products are sold at the farm store in New Hamburg as well as specialty shops and grocery stores throughout Ontario. Quark has been in select stores such as Pfennings in St. Agatha since early 2019.

At the SIAL Canada show, you can visit Mountainoak Cheese at the Dairy Farmers of Ontario booth (booth #2242).