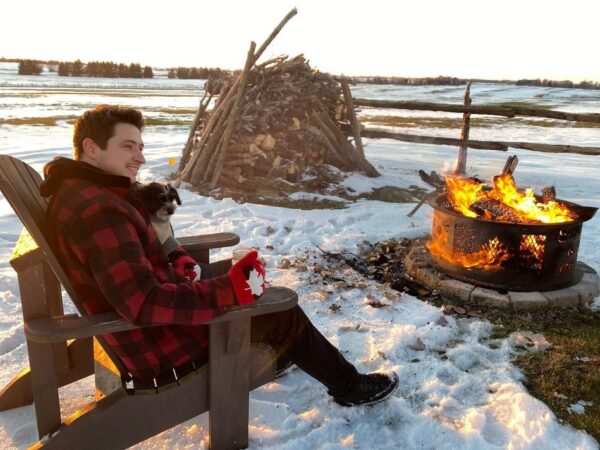 Scott Moir, one of the world’s foremost ice dance champions, has partnered with Club House®, French’s® and Billy Bee® on My Home is Canada to unify people and celebrate the best of Canada (CNW Group/Club House)

The My Home is Canada campaign and decorated Olympian Scott Moir ask Canadians coast-to-coast to share images of cherished moments, stunning places, favourite foods, and more to showcase national pride. These images will culminate in an enormous light show that highlights Canada’s diversity, family, heritage, landscape and food. Canadians can share photos by using #MyHomeisCanada on Instagram, Facebook or Twitter between now and January 19th to be included in the light show, coming soon.

Scott Moir, one of the world’s foremost ice dance champions, has partnered with McCormick & Company’s brands Club House, French’s and Billy Bee on My Home is Canada to unify people and celebrate the best of Canada. A bright light to shine in the dark of winter, this unique display will feature a mosaic of images transformed into Canadian icons and landmarks including a maple leaf, Peggy’s Cove Lighthouse, the Rockies, the Montreal Olympic Stadium and a map of Canada.

Each brand involved in this campaign is strongly rooted in the Canadian community. For 137 years, Club House has been part of London, Ontario, producing a range of beloved cooking and baking flavours that are relied on by Canadians every day. French’s Ketchup is made with one hundred per cent Canadian-grown tomatoes from Leamington, Ontario then blended and bottled in Ontario. Billy Bee Honey, a Canadian favourite for over 60 years, is locally sourced from Alberta, Saskatchewan and Manitoba.

About Club House
Club House traces its roots back to 1883, where it first operated in London, Ontario, and today is Canada’s leading flavour brand. For over 135 years, Club House has been making Canadian meals taste great – through spices, herbs, seasoning blends, extracts, food colours, sauce mixes and other flavourful products available in retail outlets and foodservice businesses. Visit www.HelloFlavour.ca for more information and recipes.
About French’s
French’s was first introduced to the hot dog – and the public – at the World’s Fair in 1904. It was love at first bite. Through the years, French’s has become a Canadian staple from the ballpark to the backyard to the holiday table. French’s family of products include Tomato Ketchup, Classic Yellow Mustard, Worcestershire Sauce, Crispy Fried Onions and more. Visit www.helloflavour.ca for more information and recipes.
About Billy Bee
A favourite among Canadians for over 60 years, Billy Bee honey is locally sourced from beekeepers in Alberta, Saskatchewan and Manitoba. Billy Bee honey is 100% pure and natural with no preservatives or additives. Billy Bee also participates in the True Source Honey™ Certification program which traces the origins of honey, making sure it is ethically and transparently sourced. Invite Billy Bee products to the table and bring some sweetness to your day.