To some, vanilla is ordinary, to others it’s divine. Vanilla gained increased attention in 2020, but this attention was not positive — over 80 lawsuits found their way into U.S. courts alleging consumer deception related to foods represented as “vanilla” but not exclusively containing natural flavour from vanilla beans. While some of these suits have been dismissed, the story for many continues. While conditions affecting cases vary, a common allegation is that the food represented as containing vanilla did not wholly or substantially contain flavour derived from vanilla beans. Some allegations suggest that artificial flavours represented the vanilla flavour. In the few cases that were dismissed, the courts found that the expression “vanilla” alone did not suggest to a reasonable consumer that the food is made exclusively with flavour derived from vanilla beans. However, among the 80 lawsuits are instances where labels have explicit statements and pictures related to vanilla beans. Defendants in these cases will likely be met with a steeper challenge.

U.S. food labelling rules in Title 21 of the Code of Federal Regulations (CFR) speaks to when and how the characterizing flavour related to primary recognizable flavour representations on a label must be qualified. This depends on the nature of the ingredients and flavours added. For example, a flavour representation by words or images related to an added artificial flavour must identify that flavour and in the name the food, as containing that artificial flavour. If a food contains represented natural flavour reinforced with other natural flavours, it must be labelled as a food to which the named flavour is added plus identify that it contains other natural flavours. In a strange twist, a food represented by the primary recognizable flavour of cherry to which no real cherries or natural cherry flavour is added but is instead is represented by natural almond and strawberry flavours, would be labelled as artificially cherry-flavoured or almond-and-strawberry-flavoured. While the flavour naming rules in 21 CFR 101.22 are generally applicable to all food governed by U.S. Food & Drug Administration, certain foods like ice cream have unique and differing considerations.

Canadian food labelling regulations, in contrast, do not reach as far. Flavour callouts are, in the case of prepackaged consumer foods, fixated on pictorial flavour representations. The Safe Food for Canadians Regulations requires an image of a cherry on the main panel, where an artificial cherry flavour is added, to be accompanied with a statement “imitation,” “simulated” or “artificial” flavour. In the case where the food contains natural almond and strawberry flavour that simulates the cherry flavour, the pictorial representation would not need qualification and it would be adequate for the food to be simply described as being cherry-flavoured. Where such a food does not include any images of cherry but calls out cherry in the name of the food, it would be adequate by Canadian rules to again just represent that food as being cherry-flavoured. The latter is not an explicit requirement but something that is generally done to otherwise mitigate mispresenting the composition and value of the food. When the already proposed food-labelling modernization rules are finalized, this would then be mandatory.

Ingredient labelling in both Canada and the U.S. permits flavours to be identified collectively as natural or artificial flavours, where they meet applicable considerations. In general, while natural flavours are derived from natural sources, what may be included under that collective term varies between Canada and the U.S. In Canada, an artificial flavour for ingredient labelling purposes is “derived in whole or in part from components obtained by chemical synthesis.” The standard for artificial flavour in Division 10 of the Food and Drug Regulations, states that “the flavouring principles may be derived in whole or in part from sources other than the aromatic plant after which it is named.” Essentially, a Division 10 artificial flavour can be made with just natural flavour, (e.g. an artificial cherry flavour made with almond and strawberry flavour), but for ingredient labelling purposes can be identified as “flavour” or as “artificial cherry flavour.” A cherry vignette with this added artificial cherry flavour would not need qualification and the food can just be called cherry-flavoured. The U.S. rules can also result in weird scenarios. In the U.S., the same cherry-flavoured food with natural almond and strawberry flavour must be labelled as artificially cherry-flavoured, but the list of ingredients may identify the almond and strawberry flavour as a “natural flavour.”

Vanilla extract, essence and flavour are standardized foods in Canada and the U.S. It is flavour that is derived from the bean of the vanilla orchid. The principal flavour of vanilla (vanillin) is not exclusive to vanilla beans. Flavour derived from vanilla beans is also characterized by other aromatic flavours present and produced in the making of vanilla flavour. Vanillin is found in other natural substances and can also be produced via conversion from other naturally-derived substances, such as from clove oil or rice bran fermentation. Vanillin may also be produced synthetically from lignin or petrochemical precursors. The line that defines what is and is not natural is fuzzy. Castoreum, a substance that is vanilla-like, used to be used in foods. It comes from beaver butt glands, no joking. But it’s natural, eh!

In Canada, a label that does not include any pictorial representations of vanilla beans or plant parts (i.e. flower), but which contains an artificial vanilla flavour, can still be represented as “vanilla” or “vanilla-flavoured.” U.S. courts seem to accept the idea that “vanilla” speaks to the flavour of the food, regardless of its source. Issues may however arise where impressions that real vanilla bean flavour may be present. Flavours are so mysteriously complex, and labelling can sometimes lack intuition. How is it then possible to determine what a consumer may reasonably understand? 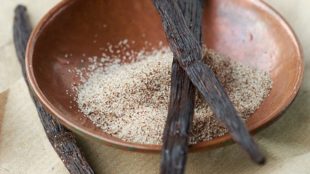