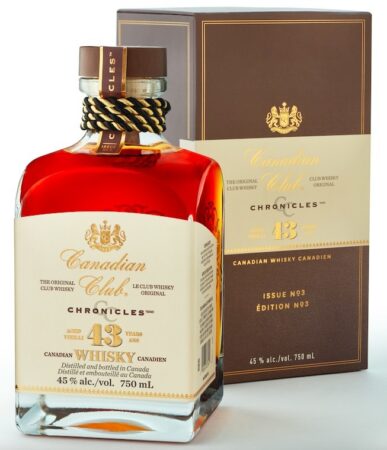 “This is truly a remarkable whisky, so deserving of the accolade,” said Davin de Kergommeaux, head judge and founder of the awards. “Canadian Club has been shortlisted for best whisky in past years, and for 2021, the judges awarded Canadian Club 43-year-old the highest overall score among over 130 Canadian whiskies entered in the competition.”

Windsor’s Hiram Walker Distillery is the 2021 Distillery of the Year, while Devine Distillery and Winery in Saanich, British Columbia was awarded Artisanal Distillery of the Year. Devine distiller, Ken Winchester received accolades for Lifetime Achievement in distilling. Shelter Point Distillery from Campbell River BC and Two Brewers from Whitehorse Yukon tied for Best Single Malt.

About the Canadian Whisky Awards: The annual Canadian Whisky Awards, broadcast online in 2021, are normally held in conjunction with the Victoria Whisky Festival. The awards recognize the very best Canadian whiskies, and are intended to encourage distillers to maintain the highest quality standards. To qualify, each whisky must be distilled and matured in Canada.

An independent panel of whisky experts selects the winners after tasting each whisky blind. In keeping with current trends in whisky connoisseurship, the jury includes both women and men tasters, who have made significant contributions to understanding Canadian whisky.

Operated on a not-for-profit basis, the Canadian Whisky Awards are fully independent of the Canadian whisky industry.
For full results https://canadianwhisky.org/