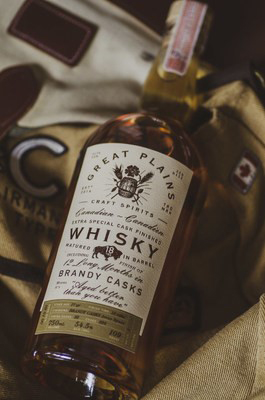 Calgary, Alta.-based Great Plains Craft Spirits received a gold medal and the award of excellence for best new whisky at the 2020 Canadian Whisky Awards for its debut product, a western Canadian 18-year-old whisky that was finished for over 12 months in Jerez Brandy casks, bottled at cask strength, non-chill filtered, with no colouring.

How did a start-up produce an award-winning, 18-year-old whisky?

Great Plains acquired several batches of 17-year-old, 100-per-cent corn whisky originally from the old Potter’s distillery in Kelowna, B.C. One batch was then transferred from the original bourbon barrels to 22 freshly emptied vintage Brandy de Jerez casks. Then, after more than 12 months of finishing, it was blended and bottled at high proof without colouring or chill-filtering.

Calgary whisky specialist, Kensington Wine Market, is currently carrying the product and states that it is a “a unique twist on Canadian whisky, distinctly Canadian with a spicy-dark fruit flourish.”

The company said in a statement that it is extremely grateful for the recognition of its debut product.

“It’s a culmination of over three years of passion and hard work,” the statement said. “But we’re even more excited about the other unique products in development. We have another batch of 17-year-old whisky from the same distillery that is in the process of a 24-month-long finish in vintage cognac barrels that were re-coopered to a small size.”

The goal of Great Plains is to produce limited runs of interesting whiskies that appeal to enthusiasts who can appreciate the uniqueness of its products.

“Our limited-run whiskies are custom-crafted with expressions that simply aren’t available from the large producers,” the company stated.