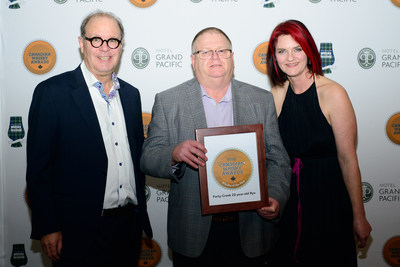 VICTORIA, BC—The best whisky in Canada is an all-rye whisky, distilled 22 years ago at Forty Creek Distillery in Grimsby, Ont.
After blind tastings of well over 100 whiskies, 10 independent whisky experts have declared Forty Creek 22-year-old Rye as Canadian Whisky of the Year in the ninth annual Canadian Whisky Awards.
Held each January at the Hotel Grand Pacific in Victoria, BC, as part of the Victoria Whisky Festival, the Canadian Whisky Awards recognize the very best whiskies produced in Canada.
To qualify, the whisky must be distilled and matured in Canada. An independent panel of whisky experts selects the winners after tasting each whisky blind.
Awards founder Davin de Kergommeaux described Forty Creek 22 year-old Rye as: “A huge, yet elegant rye whisky, just bursting with complex flavours.”
Other top accolades went to whiskies from JP Wiser’s, Canadian Club, Crown Royal, and Gooderham and Worts. Forty Creek founder, John K. Hall was announced as the first member of the Canadian Whisky Hall of Fame, while Dr. Don Livermore was named Blender of the Year.
“Every year the whiskies are just that much better than the year before,” said de Kergommeaux as he revealed the winners. “Top whiskies from five or six years ago might earn a silver medal today.  The competition is that intense.”
As the Canada’s pre-eminent Canadian whisky competition, the independent judging panel, served up some surprise honours to relative newcomers such as Saskatchewan’s Last Mountain distillery which took home top spot as Microdistillery of the Year.
Operated on a not-for-profit basis, the Canadian Whisky Awards are fully independent of the Canadian whisky industry.
For full results www.canadianwhisky.org.