The most thought-provoking book I read during my winter vacation this year was Salt Sugar Fat: How the Food Giants Hooked Us by Michael Moss. Its main thesis is clear from the title – the big food companies overuse salt, sugar and fat in their manufacturing of processed food, causing a health crisis in America that includes a huge growth in obesity, heart disease and diabetes. He says that they’ve discovered through new scientific research how these ingredients can be mixed and added to foods in multiple ways to turn consumers into virtual addicts. Moss is not as irritatingly preachy and elitist as his urban foodie colleague Michael Pollan, but the book is a trenchant polemic by yet another New Yorker who doesn’t like big food corporations. I have my own biases, as the former regulator of these food giants and later having acted for many of them, and I’m not a scientist, so I’ll refrain from listing my many concerns with his main premise. But the issues he raises deserve serious debate.

By now the book is a bestseller. Many readers will have read the book already. Mainstream urban media have issued gushing reviews, never missing a chance to beat up on the food processing industry. So this is not a conventional book review – I’ll just share three points.

Moss is a good storyteller. For example, we learn of the young Canadian farmer from Stevensville, Ont. who ends up in 1912 as a street vendor in Chicago. Tinkering at night in his boarding house, James Kraft discovers a way to pasteurize cheese and begins selling it in tin cans. We learn about William Wallace Cargill, the son of a Scottish sea captain, who buys his first warehouse to store grain in Iowa in 1865. Today his company is one of the richest in the world, with sales in 2012 of $133.9 billion, and is still private, being controlled by his 100 descendants. The exciting story of the invention of the highly successful Oscar Mayer Lunchables line is told by the inventor himself. Dean Southworth tells the story of why and how he invented one of my favourite foods, Cheez Whiz. We get the inside scoop about how the marketing people at one of the food giants discover how to turn its drink made with sugar and artificial flavours into marketing gold simply by adding a miniscule amount of real fruit juice. Moss’s re-telling of his 2009 story of how he “exposed” as “pink slime” what many still think is a good product (lean fine textured beef) should serve as a cautionary tale for any innovative food processor.

Moss’s main sources are his many interviews with retired or fired former food company scientists and executives. Time and again, fascinating accounts of highly confidential internal meetings and material are readily given to Moss. These industry veterans seem to feel no sense of loyalty to their former employers and, in comfortable retirement in their lovely homes in southern Florida or California, are beyond reproach and happy to spill the beans. Many of them insist they never did or would actually eat the food they invented or sold, and they seem to relish the chance to try to make amends for their life’s work, to unburden themselves for their many past sins.

Finally, the book ends on an interesting regulatory note. When a former CEO of one of the largest food giants is asked whether he thought government should be more aggressive in setting limits on salt, sugar and fat, he replies: “Regulation may well be the best way.” I have often noticed this paradox. While publicly critical of regulation, privately companies often welcome regulation, as this is the only way to have a level playing field. This is particularly relevant to Canada today as rumours persist that Canadian regulators are moving scarce resources away from food standard setting and enforcement of quality and nutritional labelling in order to focus on food safety. This is a mistake. As Moss’s book demonstrates, what’s in

our food and how it’s labelled may be as important to our health as the safety of it.

Putting Salt in its Place 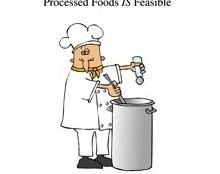 Professor working on a way to reduce salt