Norovirus and the connection to foodborne illness

Dr. Ron Wasik discusses the leading cause of foodborne illnesses in North America 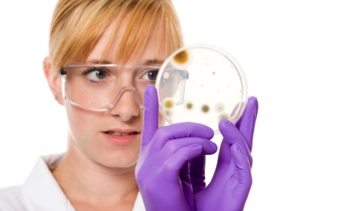 The human norovirus is the leading cause of foodborne illnesses in North America, accounting for approximately 60 per cent of acute gastrointestinal illnesses involving vomiting and diarrhea. Much has been learned in recent years about how norovirus is transmitted, and the effectiveness of some common approaches to limit its transmission.

Viruses were first discovered in 1892. Today we know that viruses outnumber all other living organisms on this planet. They only replicate within living cells of other organisms (hosts), and are normally host-specific, meaning that they usually infect a specific host species. However, it is well known that viruses can both mutate and “jump” species. Need I remind readers of ongoing swine and bird flu pandemic concerns? Some speculate that viruses play a role in species evolution through their ability to modify the genes of the host organism.

Noroviruses can be transmitted directly from person to person and indirectly through the air and through contact with infected surfaces, food and water. It is believed that fewer than 10 virus particles can result in a full-blown infection in 24 to 48 hours after contact. Most of us are all too familiar with the symptoms, which include nausea, projectile vomiting, diarrhea, abdominal cramps, fever, lethargy, headaches and muscle aches. These symptoms normally pass in one to five days, but in rare cases infections may lead to Crohn’s and other debilitating GI diseases.

Infected individuals unknowingly and unavoidably spread their infections far and wide. Viruses spread through virus-laden fecal and vomitus materials. Viruses can remain viable for weeks on clothing, counter tops, walls, faucet handles, toilet seats and various other unsanitized dry and wet surfaces. One scientist reported that her team detected viable virus particles high on a wall over six metres from a toilet used by an infected patient a week earlier. Individuals who feel that they have recovered from their infection can shed viruses for days after symptoms disappear.

Significance to the food industry

Most norovirus outbreaks have been traced back to infected food handlers preparing minimally processed foods such as deli sandwiches and salads. Another frequent cause of outbreaks is infected and/or recently infected individuals coming in contact with large groups of individuals in confined spaces such as airplanes and cruise ships, and institutions such as hospitals, retirement homes and prisons. Food processing plant cafeterias, washrooms and change rooms are also prime locations where noroviruses can spread rapidly and with disastrous consequences.

Recently published studies on norovirus transmission from humans to food and equipment indicate that these viruses are readily transferred by contact. Gloves appear to provide some protection, but it is limited. Food handlers should not only wear sanitary gloves, but also put on a fresh pair every two hours or less if they remain at their station. Workers who leave their station should wash their hands and don a new pair of gloves prior to returning.

Employers should stress to employees that it is both in the company’s and the employee’s best interests for people to stay home if they experience norovirus symptoms and/or if they come into contact with anyone exhibiting norovirus symptoms. Employees recovering from norovirus infections should be required to get a physician’s certificate to confirm that it is safe for them to return to work. Given that infected employees can easily infect their co-workers, it’s best to be cautious.

Most of the research I came across pointed out that a number of chemicals commonly used in the food industry to sanitize food and equipment, such as ethanol, peroxyacetic acid, quaternary ammonium chloride and sodium hypochlorite, may not be effective or have little effect on norovirus. Anyone using these chemicals for the purpose of controlling norovirus should validate the effectiveness of their process.

Literature suggests that the most effective and reliable means of dealing with norovirus on equipment may be the use of standard cleaning practices involving a generous amount of hot water, soap and physical scrubbing, followed by rinsing with potable water. The jury appears to be out on what may be best practices for controlling norovirus on produce. If anyone knows of processes or chemicals that effectively control norovirus, please drop me an email.