Don’t care about the new Food Guide? Some do, especially when it comes to plant-based dieting

According to a recent poll from Angus Reid Global in partnership with Dalhousie University, plant-based nutrition is alive and well in Canada. By April 2019, 38 per cent of Canadians had tried a plant-based food item in recent months. That’s almost two in five Canadians. British Columbia had the highest rate, at 44 per cent, followed by Quebec at 42 per cent.

The Beyond Meat phenomenon certainly has something to do with it. Over 3,000 retail outlets across the country now carry the Beyond Meat product. The California-based company made plant-based nutrition more scalable and more accessible, although retail prices are wonky. While some stores will retail two Beyond Meat patties for $8, others will sell them in bulk, at $1.50 each. That’s dangerous for the brand and for the category in an emerging market. 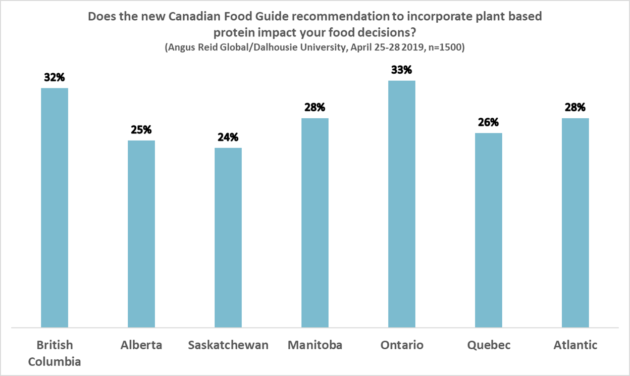 Most of these products can be found at the meat counter, right next to protein’s bloody version. Knowing that vegans and vegetarians don’t even come close to the meat counter, Beyond Meat is after flexitarians – those consumers wanting to reduce their animal protein intake, for one reason or another. In recent weeks, reports suggest that some stores across the country have been selling 50 to 70 units per day of the Beyond Meat product. It’s unclear how these sales have affected demand for beef, pork, or chicken, but it’s quite reasonable to believe that they have.

Some have claimed that Canada’s new Food Guide may have something to do with this movement. This move towards plant-based nutrition has been going on for a while, but the new Food Guide has put an exclamation point on this trend. Surprisingly, according to the same survey by Angus Reid Global, 29 per cent of Canadians admitted that the new Food Guide’s recommendation to incorporate plant-based protein impacted their food shopping decisions. More than three months after its release, 33 per cent of Ontarians acknowledged having been influenced by the Food Guide. So, it does seem that some people are influenced by the Food Guide after all.

This euphoria towards plant-based nutrition is just the beginning. The market will evolve. The Beyond Meat product is great, but it’s far from perfect. It does include natural ingredients like yellow peas. In fact, some of them come from Canada. But it is also a manufactured mix of unnatural ingredients. To replicate what beef does in your mouth requires a great deal of mastery and food science. Not all of this is completely natural. Over time, the plant-based market will become more educated, and sophisticated. The imperfect nature of the Beyond Meat product, and others like it, will need to be addressed. There are plenty of market gaps other start-ups can capitalize on. Let’s hope some of these companies are in fact Canadian.

Consumers want to save the planet, animals, and many other things, one bite at a time, and there’s nothing wrong with that. For the next little while, an exact copy of beef will be difficult to find. But that day is coming, and much faster than cattle producers may think. The beef industry should not underestimate food science’s wonders and influence. Plant-based products are invading the market, but we could also see cultured meat, and more insect-based products in years to come. Consumers are now in a place where anything is possible. Great opportunities for the food industry are on the horizon, so standing still is anything but a viable option.

Despite all the noise around plant-based nutrition, beef does have a bright future. But it will need to define itself differently in the eyes of consumers who will want something authentic, unique and natural. Knowing that no company can replicate what beef does without a little help from research and science, nature is on the side of beef, no pun intended. Our relationship with proteins is changing very quickly. Beef will need to place itself in a world where many alternatives co-exist.