A meal by any other name

Snacks, in all their forms, now account for US$374 billion annually

There’s a good chance that as you’re reading this you’re also snacking. How do I know? Because in a recent global survey of eating habits more than three-quarters of the population admitted to often or sometimes eating between meals. Almost half of those surveyed even say they snack as a meal alternative.

Snacks, in all their forms, now account for US$374 billion annually, a two-per-cent increase in spending between 2013 and 2014, according to the 2014 Nielsen Global Survey of Snacking. The majority of snack sales are in North America and Europe, regions such as Asia-Pacific, Latin America and the Middle East/Africa are growing at much faster rates, increasing by four, nine and five per cent respectively. By polling 30,000 people in 60 countries, Nielsen aimed to uncover the types of mini meal preferences around the world.

While the survey revealed the similarities in our snack preferences – over a month 64 per cent of respondents worldwide said they ate chocolate, while 62 per cent ate fresh fruit – there are vast differences in snack preferences around the world. In North America, for instance, salty snacks account for the largest snack category, while confectionery is number-1 in Europe and the Middle East/Africa. And in the Asia-Pacific region refrigerated snacks rule, while in Latin America cookies and cakes edge out confectionery for the top spot.

A new online video currently going viral reveals just how wide ranging consumer perceptions of packaged snack foods can be, especially when the products are unfamiliar. The video, filmed in January, shows a group of young Korean women sampling “typical” American snacks, with mixed results. The women have no problem digging into more familiar fare like chocolate rice crispy squares and savoury cheese crackers. But other products, like Pop-Tarts and Twizzlers, leave them puzzling over how to eat them and what they should taste like, leading to comments like “Ah…the smell of artificiality,” and “It tastes like a mix of rubber and strawberry.” Not surprising considering typical Korean snacks tend to favour umami or savoury tastes (for more on umami see Ingredient Spotlight on page 25).

Meanwhile, our tastes are changing. Sales of savoury snacks are on the rise, as are sales of meat snacks, including jerky and dried meat (for more on trends in meat see The Meat Report starting on page 22). All-natural ingredients are also now prized by 45 per cent of worldwide snackers, as are healthy attributes such as fibre (37 per cent), protein (31 per cent) and whole grains (29 per cent).

But perhaps most telling was the fact that just 27 per cent of survey respondents said portion control was important to them. Happy snacking! 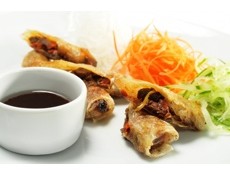