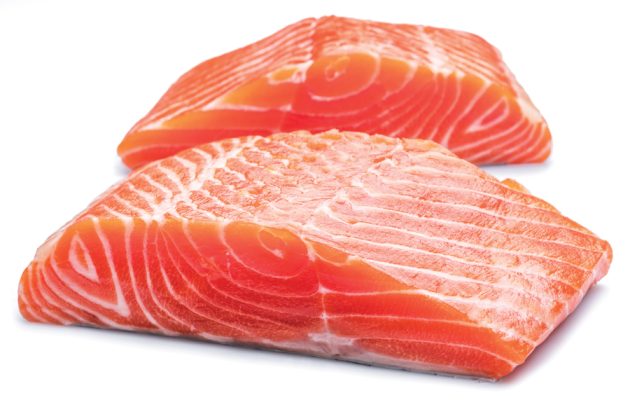 It’s been said that we eat first with our eyes. That adage drives researchers, farmers and food companies to seek new food innovations. Look no further than farmed salmon. It is known for being a rich source of antioxidant carotenoids, which also lends the salmon an iconic orange-pink hue. Studies have shown consumers preferentially purchase, and are willing to pay more for salmon with a deeper flesh colour (a perceived sign of quality). However, salmon isn’t naturally pink—wild fish absorb carotenoid pigments from their food like small crustaceans or algae. Salmon farmers achieve this colour using fish feed with synthetic pigments or those isolated from biological sources like kelp or shellfish.

Pigments comprise an estimated 20 per cent of salmon feed costs, but it’s viewed as a necessary expense to maintain fish health and product quality. Consequently, researchers in South Korea and the US have been racing to develop ‘two-fer’ carotenoid-containing plant crops to cut feed costs (picture a salmon eating orange edamame).

Using genetically engineered (GE) plants to improve feed nutrition or impact food characteristics isn’t a new concept. GE foods and feeds are tightly regulated by Health Canada and CFIA, and may raise a number of considerations for businesses across the food supply chain. It’s important industry stakeholders considering developing or using GE plants for animal feed (as well as others in the supply chain) are aware of how these products are regulated in order to make appropriate business decisions.

In addition to the regulatory approval process itself, which is lengthy and complex, GE plants may raise questions related to product labelling, claims and general consumer perception (both within Canada and in export markets), which impact the cost-benefit analysis of developing or using these plants. For example, in Canada, food companies must ensure claims are not misleading to consumers, and there can be ambiguity regarding the relationship between animal feed and claims made for the resulting food product.

Continuing with the salmon example, non-GE carotenoid colouring agents for animal feeds are tightly regulated by CFIA. The maximum allowable content depends on the pigment type and intended use, both of which impact animal and consumer safety. For example, the carotenoid, astaxanthin (mainly responsible for salmon ‘pinkness’), is approved up to 80 gm per tonne in complete salmonid fish feed. Despite this, CFIA does not have published guidance on whether or how the use of such feed ingredients should be taken into consideration for food claims related to salmon’s method of production or colour.

When it comes to GE claims, the voluntary labelling and advertising of foods that are and are not products of Genetic Engineering Standard (the Voluntary Standard) provides guidance on claims related to foods and ingredients that are not products of genetic engineering. However, the Voluntary Standard notes that “animal feeds…do not affect whether a food or ingredient is considered to be or not to be a product of genetic engineering,” which is consistent with the approach CFIA and Health Canada have taken with respect to novel feed and food approvals. Neither the Voluntary Standard nor CFIA guidance specifically contemplate claims that may be acceptable or problematic for animal-derived foods impacted by the use of a GE animal feed.

As a result, even if a new carotenoid-containing plant crop can be developed and approved by CFIA and Health Canada for use as salmon feed, companies that advertise and sell food products derived from salmon raised using that feed, will need to carefully consider the claims about their product. The same will be true for other animal-derived foods and GE feeds that may be developed in the future.

General consumer perception about foods derived from (or impacted by) genetic engineering will also play a significant role in future adoption of GE animal feeds that impact food characteristics. Although genetically engineered food products are prevalent on Canadian supermarket shelves today, some consumers are wary about their benefits and safety. There is ongoing debate around the potential for mandatory GE food labelling. It’s impossible to predict how consumer hesitancy will be weighed against specific benefits that may result from GE feeds, including product quality.

Katrina Coughlin is an associate in the Ottawa offices of Gowling WLG, specializing in food and drug regulatory law. Contact her at katrina.coughlin@gowlingwlg.com. Jennelle Patterson, PhD, is a scientific research clerk with Gowling WLG.

This article was originally published in the February/March 2022 issue of Food in Canada.