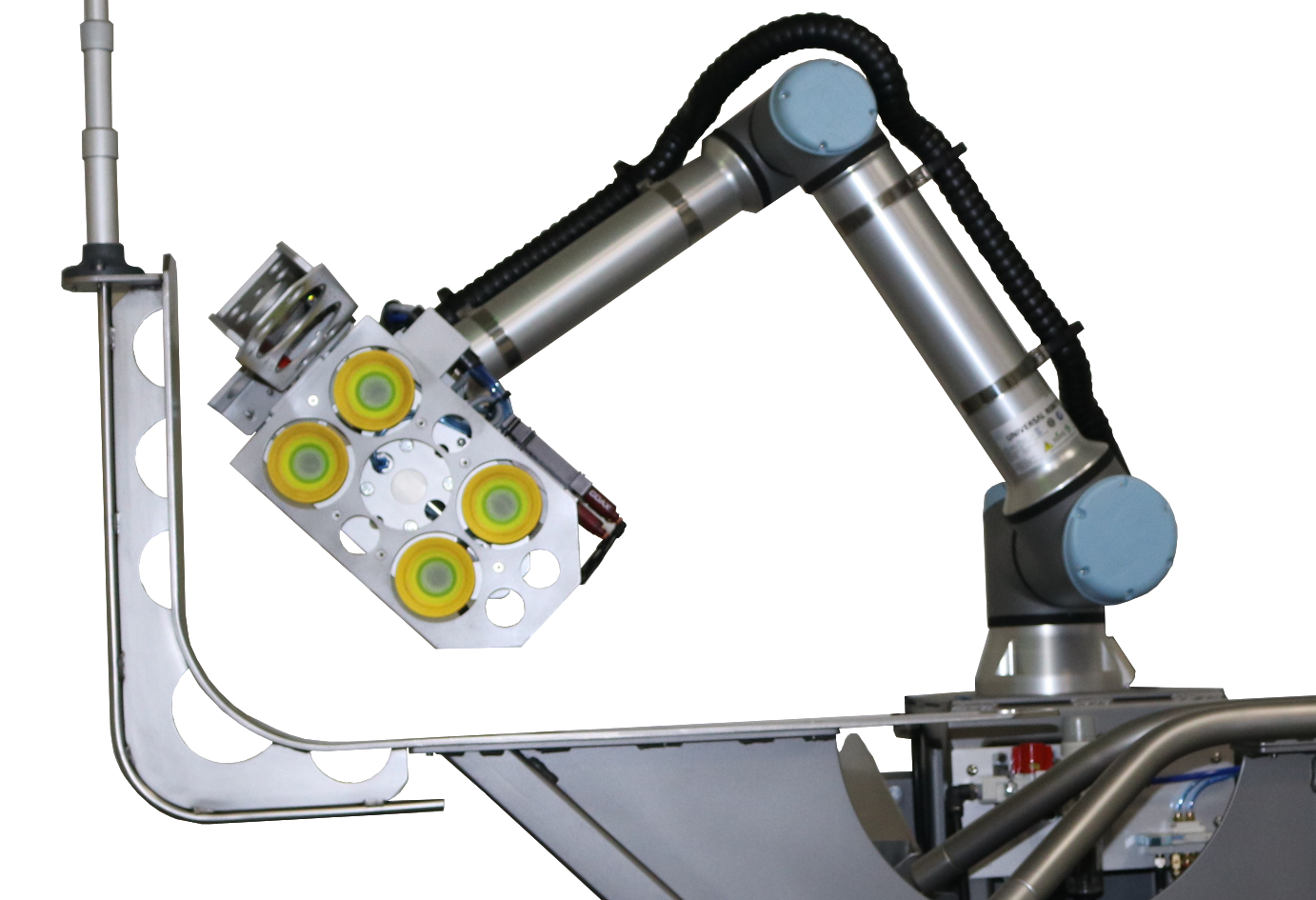 ANN ARBOR, Michigan—Packaging environments are notoriously tightly constrained, and in large part, still manual operations. Universal Robots (UR) is the market leader of collaborative robots – or “cobots” – that work safely alongside workers with no need for safety guarding in most scenarios.

At PACK EXPO International booth E-7941 in Chicago, October 14-17, 2018, the robotics manufacturer is showcasing the first solution for random robotic case erecting, the XPAK ROBOX (see image above). The new UR powered box erector developed by XPAK, allows packagers to randomly erect any box in their suite on-demand without changeover.

“This collaborative design not only enables the operator to safely and intuitively interface with our machine, ROBOX also realizes approximately 60 per cent reduction in terms of the footprint required for a similar machine using more conventional robotic technology requiring fencing,” said XPAK technical sales engineer William Reilly, adding that the company developed ROBOX as it recognized the undeniable market trends towards collaborative robotics, now the fastest growing segment of industrial automation.

The XPAK ROBOX is equipped with a UR10e cobot arm that picks a flat box from one of two magazines, squares the case, folds and seals the bottom flaps with two-inch tape. Additional magazine and custom box conveyance options allow the XPAK ROBOX to integrate seamlessly into any packaging environment.  The UR10e is the largest cobot in Universal Robots new flagship line of cobots, the e-Series, showcased for the first time at a PACK EXPO. The e-Series sets a new standard for cobots, adding built-in force/torque sensing, unrivalled safety features, and improved precision for faster integration in a wider range of future-proofed applications.

“The e-Series strengthens the core principles defining collaborative robots: fast set-up, easy programming, flexible deployment, safe operation, and a quick ROI. End-users with complex applications and diverse or uncertain future needs will benefit from the e-Series platform and our unique UR+ ecosystem knowing that their investment will be able to grow with them as their needs change,” said Universal Robots’ Americas regional sales director Stuart Shepherd, referencing the rapidly expanding portfolio of certified UR+ plug & play end-effectors, software and peripherals certified for UR cobots now available.

Also launching at UR’s PACK EXPO booth is the new PalletizUR from ONExia, a portable, collaborative palletizing system that features a UR10e cobot with graphic software for simple pallet building. This mobile system requires no written code to program and is ready to work in minutes.

Shepherd is looking forward to showing the PACK EXPO audience the capabilities of his company’s new flagship line: “It’s exciting to see our partner network embracing our new cobots, incorporating them into cutting edge applications in such a short time.

“We’re confident the packaging industry will deploy a record number of e-Series cobots in the year to come.”

Universal Robots will also be on display in the following PACK EXPO booths:

Dorner Mfg. Corp. – Booth N-4936
Dorner will be showcasing a new demo featuring three Dorner conveyors and a UR5 cobot. The integrated display shows small bottles accumulating on two Dorner 2200 Series Belted Conveyors running in opposite directions. Once the product singulates, it transfers on to a Dorner 1100 Series Conveyor and waits to be picked by the UR5. The robot then places the bottle back in a specified location to rejoin the accumulated product. Dorner elected to use the UR5 robot due to the ease of integration and the collaborative safety feature.

Dyco Inc. – Booth N-5010
On display in the Dyco booth is the Bulk Box Loader equipped with a UR10e cobot. “We are getting a lot of requests from our customers to integrate Universal Robots throughout the blow molding process. End of line packaging is just one example of their numerous applications,” said Dyco sales manager Mark Lovelace, noting the company also offers a tray loading/palletizing system with UR cobots. “We selected UR for their robustness and design for use in industrial applications vs. other collaborative robots.” The bulk box loader is a fully automated system controlled from the UR interface and a few push buttons.

FP Developments Inc. – Booth W-824
FP Developments will showcase the Robotic Pick and Place Vision Turntable, a turning disk capable of storing and orienting components for automation needs.  The turntable is equipped with positional knowledge so that the turntable can index, continuously rotate, and perform special orienting functions. The PNP table utilizes backlight and vision guidance through the UR+ enabled SICK Inspector camera which allows a UR3 robot to identify syringe locations and to pick up syringes in the proper orientation to perform necessary functions. Also on display is the Robotic Particulate Inspection Station equipped with a UR3 robot to pick up vials (or syringes given the application) while manipulating it for particulate inspection.

Kolinahr Systems – Booth N-5232
Kolinahr’s new CR10 Collaborative Robotic Label Applicator, powered by a UR10 cobot, provides the ultimate in flexibility; the CR10 is the only single applicator that can label all four sides of a packet. The applicator is intrinsically safe and collaborative so no guarding is necessary. The CR10 is easy to program and is customizable when it comes to label positions, angles and application force. The print engine used in this model is the Zebra ZE500 compatible with other printer manufacturers.

PharmaWorks Inc. – Booth W-629
PharmaWorks has integrated a UR5 cobot equipped with Robotiq’s UR+ enabled Hand-E gripper into its blister packaging TF1e machine where syringes are preloaded into trays and presented to the cobot in a stack. The cobot unloads the trays, then presents individual syringes to a printer and verification camera. Pharmaworks chose the UR cobot for its flexibility, cleanliness, and collaborative qualities. The lack of guards allows for easy wipe down between batches and required operator interaction during production.

PIAB – Booth: N-6233
Piab’s UR+ enabled vacuum gripper piCOBOT mounted on a UR5e cobot is designed to act as a flexible co-worker in a variety of production, packaging or assembly lines.  Included with the piCOBOT is the URCap plug-in software for the teach pendant, delivering easy programming and quick installation. Ergonomic, safe and adaptable, the piCOBOT promises to increase productivity while eliminating the risk of potential injuries to operators. Technical and electrical interfaces are seamlessly adapted for UR robots which makes it truly plug and play for the customer. The energy-optimized vacuum gripper also features onboard intelligence, which makes piCOBOT adjust automatically for each application.

RND Automation & Engineering – Booth S-3748
On display with RND Automation & Engineering is the new Kanga Poucher, a vertical form/fill/seal pouching system that forms four-sided pouches for the medical device, pharmaceutical, and durable goods industries. The system integrates with a UR3 cobot loading products into the pouches before the fourth, “top” seal is made after the product is indexed through the sealing gasket. “Collaborative robots from Universal Robots reduce or eliminate the need for guarding which means a significantly reduced footprint,” said RND Automation & Engineering president and chief executive officer Sean Dotson. “The fully customizable robots fill our customers’ unique packaging needs. They also stop safely upon operator contact and can be moved with minimal force.”

Schmalz Inc. – Booth N-6149
The Schmalz UR+ enabled Electrical CobotPump (ECBPi) belongs to a new generation of intelligent vacuum generators that do not require compressed air. The intelligent vacuum generator enables purely electrical operation and is able to handle airtight and slightly porous pieces. The CobotPump’s programming interface is integrated directly on the UR cobot’s touch screen and will be exhibited with Schmalz’ new Collaborative Gripper (FXCB / FMCB), specifically designed for collaborative robots and perfect for various workpieces from end-of-line to pick-and-place applications.

SencorpWhite – Booth N-6104
SencorpWhite is showcasing the CeraTek Medical Tray Sealer demonstrating the benefits of integrating a UR5 cobot to automate the loading of the trays into the machine cartridge. An operation usually done manually can now be performed by the cobot that integrates directly into existing work envelope due to the collaborative safety features eliminating the need for caging.

About Universal Robots
Universal Robots was co-founded in 2005 by company chief technology officer Esben Østergaard – the 2018 Engelberger Award Winner – who wanted to make robot technology accessible to all by developing small, user-friendly, reasonably priced, flexible industrial robots that are safe to work with. Since the first collaborative robot (cobot) was launched in 2008, the company has experienced considerable growth with the user-friendly cobot now sold worldwide. The company, which is a part of Teradyne Inc., is headquartered in Odense, Denmark, and has subsidiaries and regional offices in the U.S., Germany, France, Spain, Italy, Czech Republic, Turkey, China, India, Singapore, Japan, South Korea, Taiwan and Mexico. In 2017, Universal Robots achieved revenues of US$170 million. For more information, visit www.universal-robots.com or read the blog at blog.universal-robots.com.