The WS 910 weighing system is a new development that Handtmann will be presenting to the industry specialists at the IFFA 2019 for the first time. With the multifunctional VF 800 series vacuum fillers, Handtmann has developed intelligent portioning and control modules for modern production processes. They function, among other things, as the central control module for networking and synchronization with other process modules, such as the new Handtmann WS 910 weighing system. 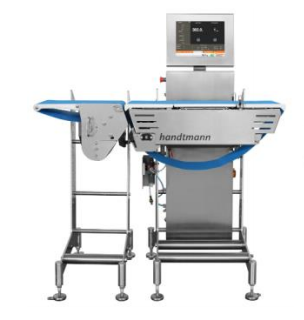 The new WS 910 weighing system is accurate-to-the-gram, which is useful in the areas of minced meat and in the production of formed products.

The main functions of the WS 910 weighing system with the SB 912 sorting belt consist of production control, monitoring and weight control, as well as ejecting under- or overweight portions after the forming and portioning process.

The weighing system ensures user-friendliness through product selection via the vacuum filler only, setting of the scales and communication then automatically in the line. It also process reliability due to increased line efficiency.

Using the new WS 910 weighing system with SB 912 sorting belt eliminates the need for rework significantly, and results in savings in packaging, resources and handling. Fewer product ejections due to accurate weight further boost the production line’s efficiency and production output. Reducing give-away to a minimum by providing 100 per cent control through reference weighing of each portion also helps lower costs.